I have always associated South Cotabato with the serene Lake Sebu and the dreamweaving  T’boli indigenous people and their masterpiece, the t’nalak. South Cotabato is in fact known as the “Land of the Dreamweavers.”

However, there are other dreamweavers in South Cotabato and other parts of Mindanao, the Blaan indigenous people. I was able to meet Blaans for the first time in Sarangani, and I was happy to find out there was also a community in South Cotabato. The Blaans’ indigenous cloth woven from dreams is the tabih, also made from abaca fibers like the t’nalak.

In Polomolok, South Cotabato, is where tabih master weaver and designer Yabing Masalon-Dulo lives. Fondly called Fu Yabing by family and relatives – “fu” is like “grandmother – she kept alive the tabih patterns taught to her by elders, and dreamed of her own patterns. She also passes on the art of tabih weaving to other Blaans in her community, and even in other communities. The Philippine government recognized her with the Gawad Manlilikha ng Bayan (GAMABA) award, or National Living Treasures award. It is the same distinction given to T’boli dreamweaver Lang Dulay, though, sadly, she already passed on.

The cultural center of Fu Yabing in Polomolok is just a few houses away from her home. At the cultural center, you get to see finished tabih and other Blaans weaving gintlo at the loom. These gintlo are usually used for Blaans’ skirts and scarves.

Our tour group was welcomed by a maral dance, which, according to Fu Yabing’s grandson, Jao Dudez, is a happy dance in the Blaan community. We were also served sweet and filling native suman (sticky rice) and coffee. 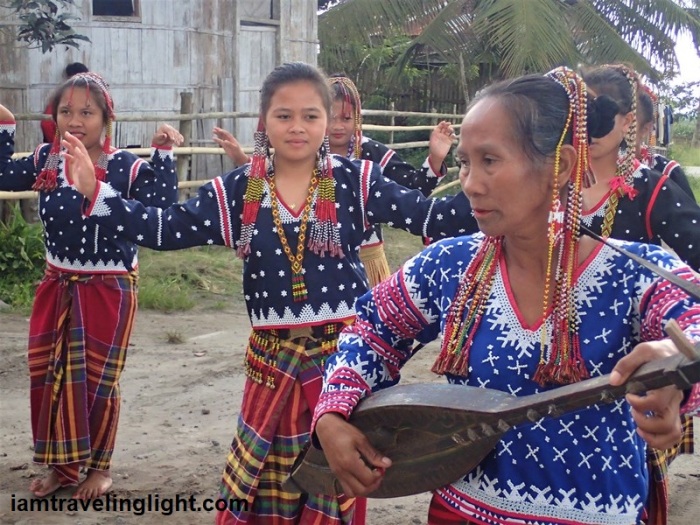 Maral, a happy welcome dance of the Blaans 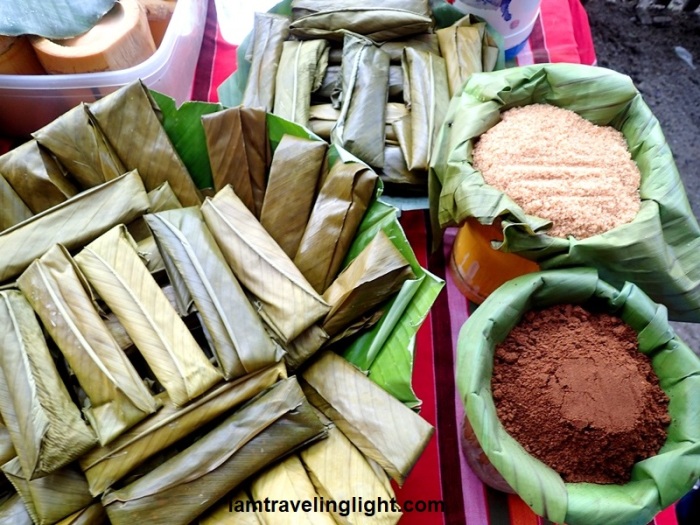 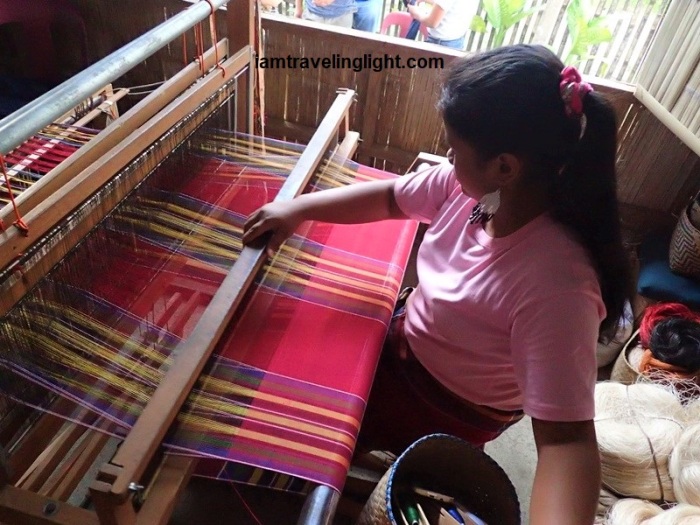 The dreamwoven tabih made from abaca fibers. Holding it are Fu Yabing’s student and relative.

Jao told me that making tabih is a painstaking task, which usually takes two months after harvesting abaca. Once the abaca threads and dyes are prepared, weaving around four meters takes seven days.

From the cultural center, we walked for a few minutes to Fu Yabing’s home. There we found her at work tying threads for the tabih’s design. Though she does not weave now because of an accident over ten years ago, she still designs tabihs. Quite admirable, for someone over 90 years old. 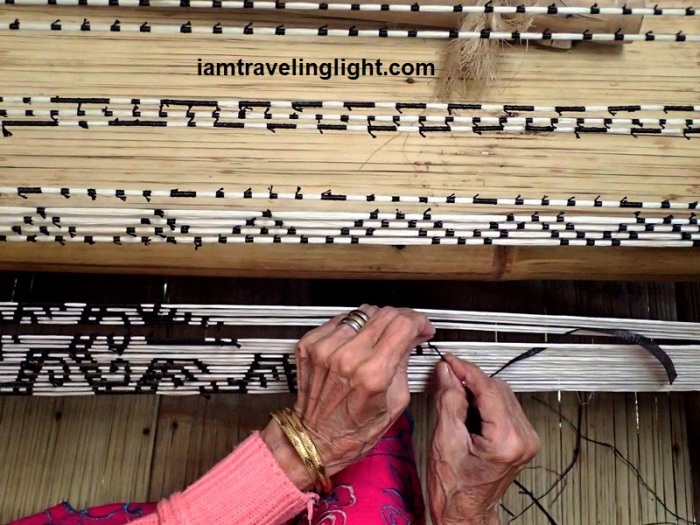 Fu Yabing designing the pattern for the tabih

Fu Yabing resting after making progress in her design

Photo with Fu  Yabing and her grandson Jao

Also nearby Fu Yabing’s home and cultural center is the Blaan Wellness and Tribal Village, where Blaan artists and leaders to welcome visitors who want to experience interacting with the Blaan community, and even staying overnight in their hut homestays. They call it a “wellness village,” because they serve healthy, delicious Blaan cuisine good for the body. They also offer Blaan traditional massage.

The Blaan way of life is a healthy way of life, one of their leaders said. With pride, he said there are 20 centenarians in their area.

Their welcome for our group was a pleasant – and for me, moving – surprise. My usual experience with indigenous peoples is they perform a welcome dance, which is already a privilege to witness At the Blaan Wellness and Tribal Village, though, they included us in the dance and the welcome ritual.

Three Blaan women danced and led a ritual to welcome our group.

They asked us to join hands with our pinkie fingers and to form a circle and then dance a simple dance. They chanted and sang in their language, and I felt an air of solemnity, of sacredness, envelop our group. Later, I learned this was a ritual of connecting for returning family and friends.

After circling for a bit, we went inside their hut, without breaking the connection of our pinkies. As each of us entered the door, we were blessed with fresh, sweet-smelling leaves in our faces. We were then asked to make an offering of a hard object, and the convenient one they suggested is coins. I later learned this was part of the ritual of welcoming back family members and friends in their home. The fragrant leaves were for cleansing.

Still holding hands, we went to an elevated basket in the basket to drop our coins. Afterwards, they made us sit and they danced for us.

The basket for coin offerings

Because we only stayed for a short time, we were not able to feast on the Blaans’ healthy and delicious offerings.  We were able to eat rice cake, though, and taste their traditional drink, lumit. It tasted like fresh mountain water. They extract it from the bark of the lumit tree. It was an ingenious way to quench their thirst as they had a nine-year drought in the past.

Outside their main hut was sweeping, lush greenery, and a 40-year old balete tree. We took in the view. On clear days, they said we would be able to see Mt. Matutum. Their rooms for homestay all have a view of the greenery. 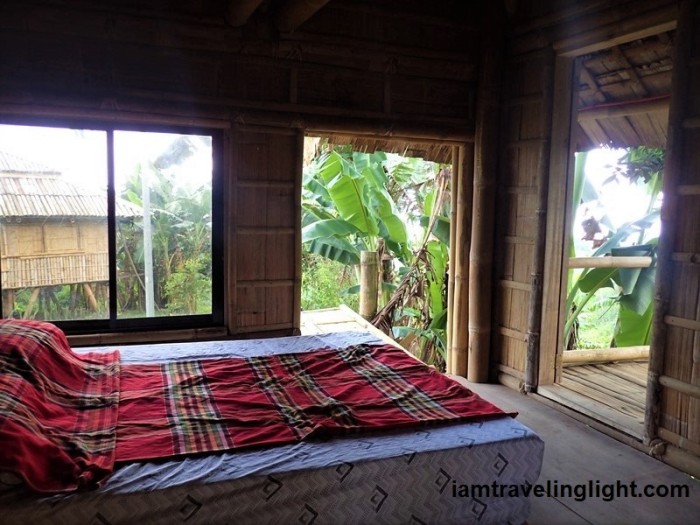 This is how a room in the Blaan Wellness and Tribal Village looks like.

Outside each room in their homestay is a balcony where you can take in the view.

Though it was a brief experience at the Blaan Wellness and Tribal Village, it was a rich, and somehow immersive one. The ritual somehow took me inside their world, albeit briefly, instead of me just watching it.

Indeed, beyond Lake Sebu is the cultural gem of the Blaan heritage.

How to get to Polomolok, South Cotabato:

Take a flight to General Santos City. At General Santos Bulaong Terminal, look for a bus or van with “Polomolok” signage. You can also ride on other trips – Marbel, too, will pass by Polomolok. Just ask the driver or conductor to drop you off at Polomolok Terminal.

For the tour to the Blaan Wellness and Tribal Village, you may contact the vilage’s project coordinator Dyan Tuble at wellnessvillages@healthfuturesfoundations.com.

For a more complete tour of South Cotabato, consider Earth Explorers, who guided us in our tour of the province and neighboring attractions.

Note: This experience was part of the Philippines’ Tourism Promotions Board-organized tour.

One thought on “Beyond Lake Sebu: Blaans’ rich indigenous dreamwoven tabih and its master weaver, and rituals, dances, homestays, at Blaan Wellness and Tribal Village”