At first glance, Julyan’s Farm in San Narciso, Zambales, appears like the usual farm with its vegetable – and lately, sunflower – plots and nipa huts. What makes the farm special, though, is that among its local farmers is Julyan Harrison, a 26-year-old diagnosed with autism. Julyan plants, waters, weeds, and looks after the farm just like his fellow farmers. 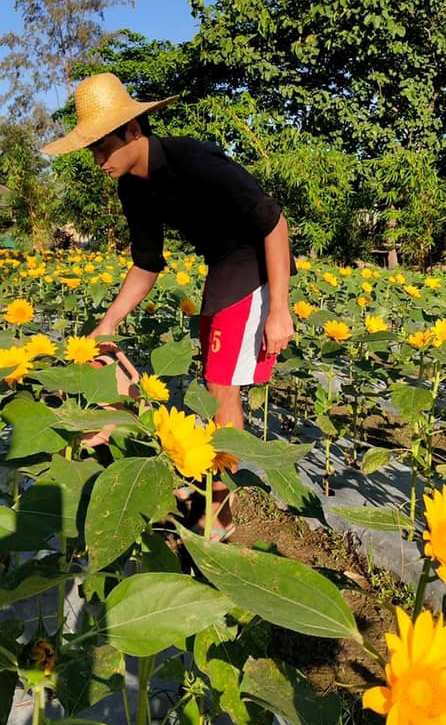 26-year-old Julyan Harrison watering the sunflowers. This photo was shared by Julyan’s Farm just recently, around the second week of March.

Julyan was not always this way. Before, also because of his condition, he would be restless, throwing many tantrums. His mother, Rachel Harrison, though, built a home for him in her native San Narciso. She named the place Zambawood, a home for Julyan where he surfs, farms, paints, and does everyday chores like sweeping, and sometimes, cooking. Julyan’s previous restlessness is now channeled to all the work and leisure activities he would do. (Read about Zambawood’s story here.)

Later, Zambawood became a resort open to the public. Julyan’s Farm is part of the resort grounds and is open to everyone, even to those who are not staying at the resort.

Mother and son Rachel and Julyan Harrison (right of photo) enjoying the March blooms this summer with guests. Photo courtesy of Julyan’s Farm

An expanse of sunflowers. This is just one of the sunflower fields at Julyan’s Farm. There was another plot of young plants we saw during our visit early March. Photo courtesy of Julyan’s Farm

Some sunflowers up close. They have yet to grow bigger this summer. Photo courtesy of Julyan’s Farm

Julyan smelling one of the fully-grown sunflowers during the farm’s first sunflower bloom of summer last year. This was the first time the farm started planting sunflowers. Photo courtesy of Julyan’s Farm

Julyan’s Farm also has vegetable plots. During my and my friends’ visit early March, there were fiery red chili ready for harvest, as well as some tomatoes and eggplants. We had fun harvesting some chili, together with mother and son Rachel and Julyan.  The sunflowers had yet to bloom that time. The farm also has a nursery for some ornamental plants. 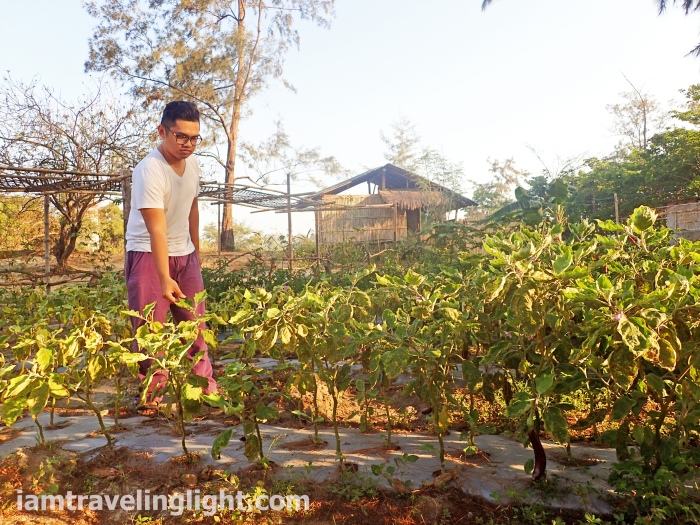 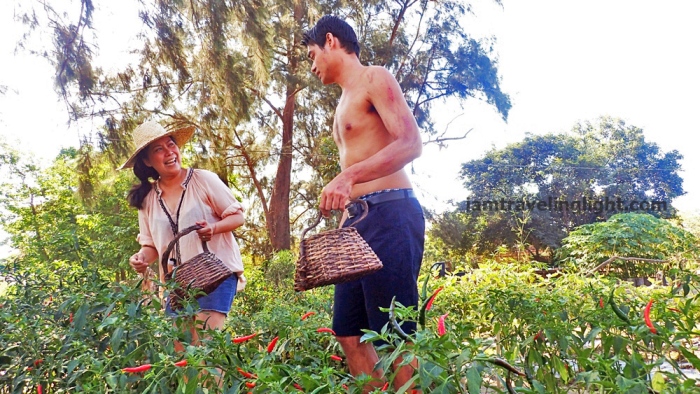 Mother and son Rachel and Julyan harvesting chili together 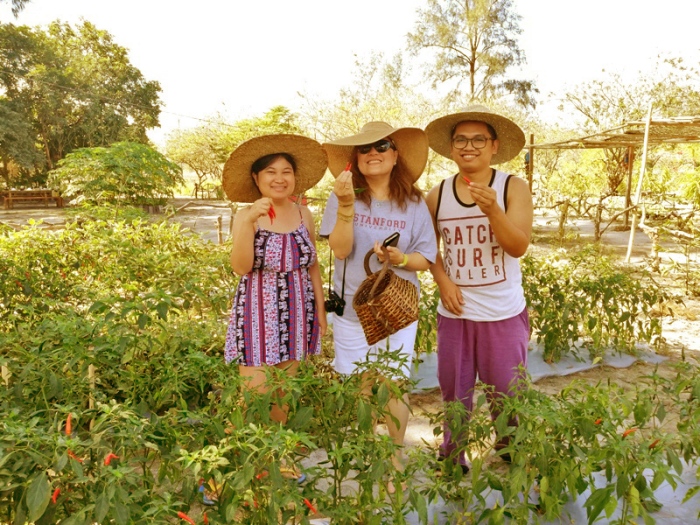 Some of us joined in the fun, too! Here’s some of our freshly picked chili!

Our group’s harvest. These would be used to make Zambawood’s hot chili oil.

The sunflowers have yet to bloom at the sunflower farm section during our visit.

I tried watering some of the sunflower plants.

Spotted a lone sunflower during our visit. 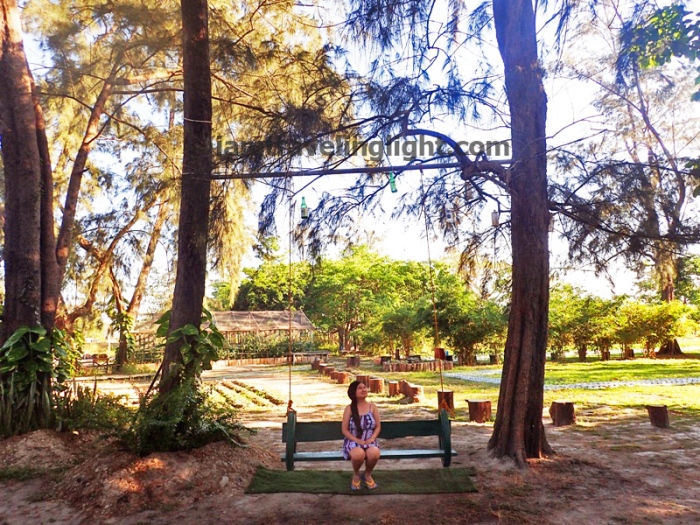 There is a swing where guests can rest in between the farm walks.

Zambawood resort guests can request to have breakfast at the farm. Ours was more of a pre-breakfast, though, as we would have a heftier breakfast at the resort later. We had pandesal with Julyan’s fruit jams! The jams are Zambawood’s recipe. My favorites and also their bestsellers are calamansi and guava. The guava jam is made from small guavas native to Zambales.

Our breakfast spread with some of Julyan’s jams

Ms. Rachel with our breakfast spread 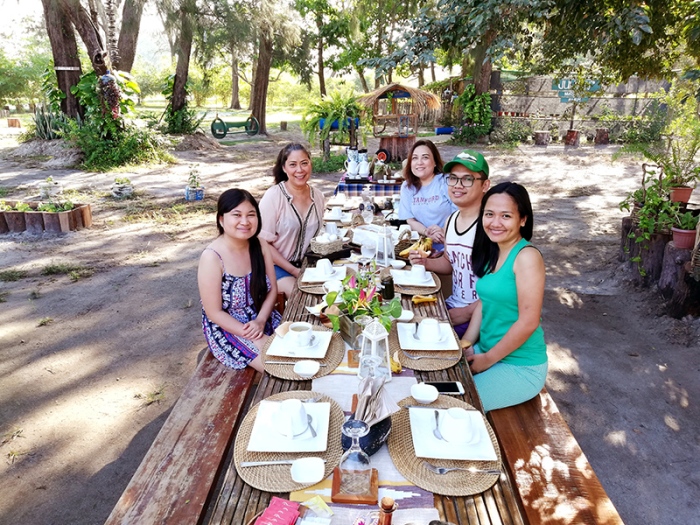 Sometimes, guests can have a full meal at the farm too. Ms. Rachel is here with some of the fresh ingredients for meals. Photo courtesy of Julyan’s Farm

Julyan’s Farm is seeded with much hope. Ms. Rachel tells of the difficult early days of the farm, as the sandy soil was not ideal for farming. They had to recondition the soil and make some compost. Their first harvest was of vegetables typically used for the pinakbet dish – eggplant, okra, and more. (Trivia: Julyan knows how to cook pinakbet!)

Ms. Rachel says that much like the sandy soil which eventually yielded vegetables and sunflowers, nothing is hopeless. This is the same principle she applies with her son and to people with special needs – that they, too, can work and contribute in society. Ms. Rachel has organized art exhibits with artworks created by people with special needs, with Julyan as one of the artists. (Read my article on the exhibit here.) She also accepts interns and regular employees with special needs at Julyan’s Coffee Spot in San Narciso town. (I will be writing about this place soon!)

Julyan’s Farm is indeed planted with much hope and love and its harvest only multiplies these.

With the mother and son at Julyan’s Farm

Now that it’s sunflower season, Julyan’s Farm is open daily to the public from 7 am to 4 pm. Follow their Facebook page for updates as their farm usually closes after the sunflower season.

Entrance fee to the farm is P50. This may increase to P100 when the sunflowers are fully grown. Proceeds go back to farm maintenance.

For vegetables, there is also sometimes a pick-and-pay option. Ask the farmers when you get there if this is available during your visit.

How to get there:

From Pasay, Cubao, or Caloocan Victory Liner Terminal, ride a bus to Iba or Sta. Cruz, Zambales and get off at San Narciso town proper. Note that there are more trips leaving Caloocan. You can also take a bus first to Olongapo, then another bus to Iba or Sta. Cruz.  Travel time is around 4-5 hours. The time is shorter if you are riding a bus taking the SCTEX highway.

From San Narciso town, ride a tricycle to Zambawood. Fare is usually P80.