The week after MassKara Festival was my second time to be hosted by Go Hotels, and its Bacolod branch did not disappoint. Just like Go Hotels Tacloban, Go Hotels Bacolod is bursting with vibrant yellows and greens. I especially like its simple but striking architecture. 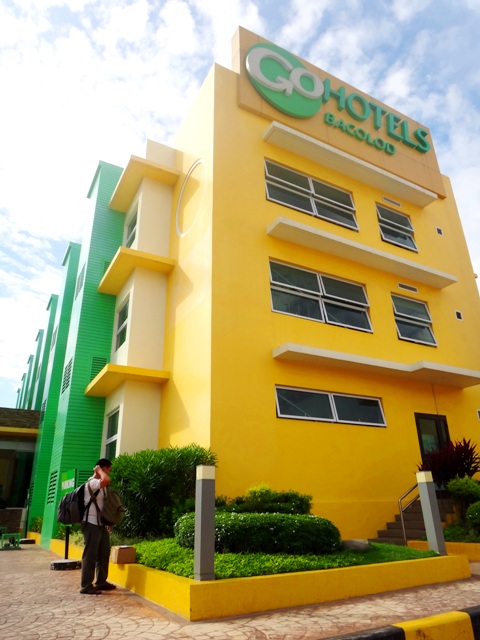 I was pleased to see that its lobby has the same ceiling art as in Tacloban – yellow, green and white circles. This seems to be a signature design in Go Hotels branches. 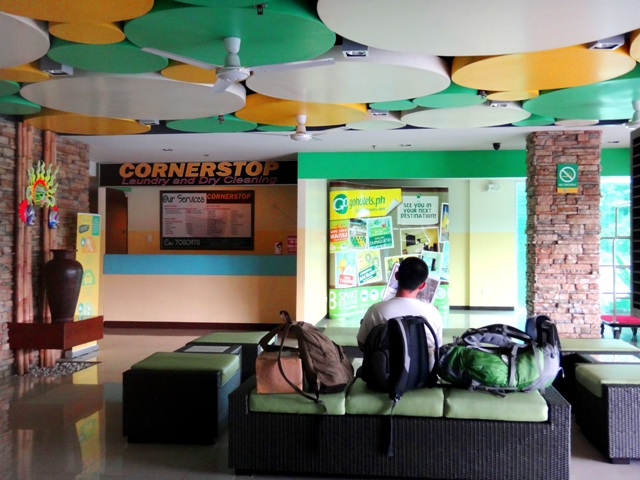 Art in the lobby

There was no Zen-inspired garden, though, which I loved about the Tacloban branch, but the bright colors in Bacolod are consistent with Tacloban’s. The room, too, has the same quality. It is also more spacious than the room I got in Tacloban (I thought the extra space was given to the gardens). 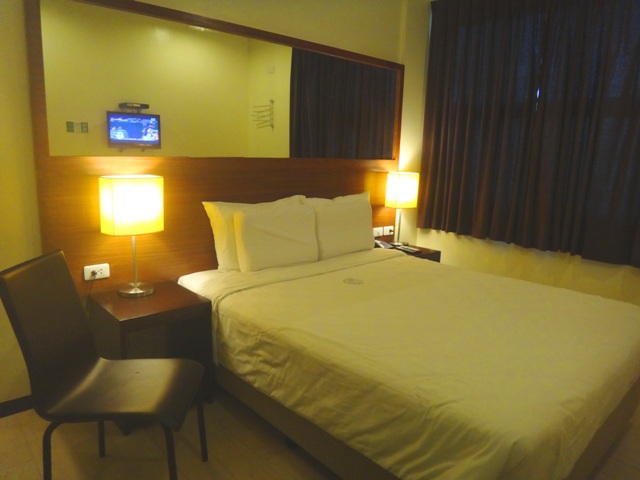 A comfy bed perfect to crash on after a long day

I was happy to find that the room has the same colorful design  as Tacloban’s of yellow walls and green circles. It has the same conveniences too like a foldout desk, a clothes and towel rack, and a safe. The bathroom also has both a big and small shower head and essentials like soap and shampoo. 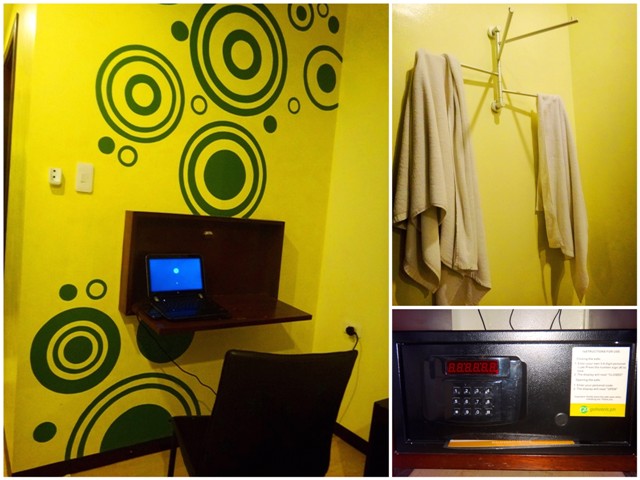 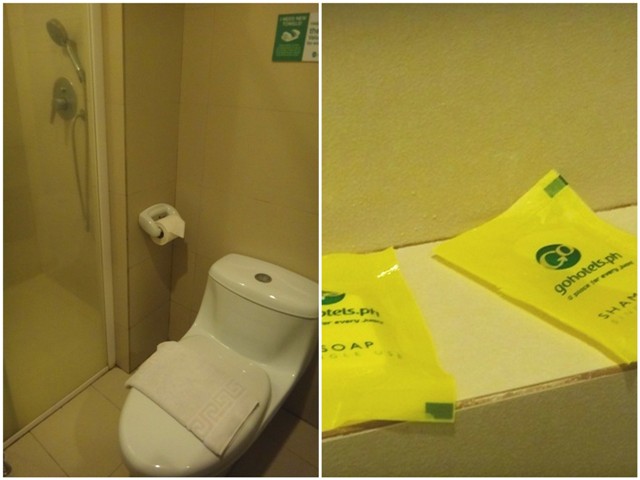 Of course, there’s also Wi-Fi in the room, though my only nitpick is that it can get slow at times – perhaps when there are many people using the Internet.

The hotel’s convenience goes beyond the rooms, though. The hotel lobby has a cafe, a laundry service, a spa with room service, a luggage storage service, and even a transportation service. The cafe is not just any cafe – it is the cafe version of Restaurant 21, one of Bacolod’s famous restaurants. Many of the restaurant’s menu selections are served in Cafe 21, including one of their specialties, batchoy. 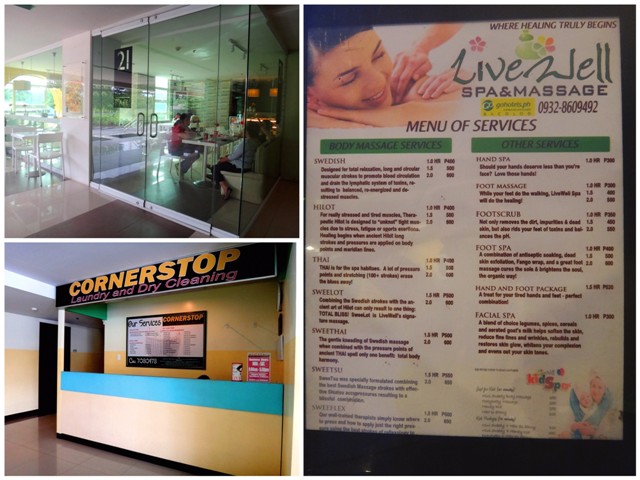 One-stop shop. Go Hotels Bacolod has partnered with different businesses to bring services like dining, laundry, and massage to guests.

As a perk, a Go Hotels staff gave me a free coupon for Cafe 21’s batchoy upon my check-in, redeemable within the day until 8 pm. As I don’t eat pork, I gave the coupon to Rem. This batchoy perk for Go Hotels Bacolod guests is seasonal and depends on availability, though. 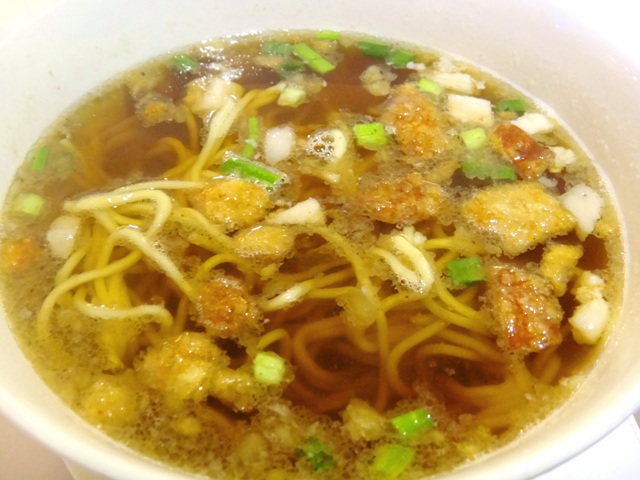 Another usual convenience of Go Hotels is that it is always built beside or nearby a Robinsons mall. I particularly like the Go Hotels Bacolod setup as it has a mall access entrance which is only a few meters from Robinsons’ City Walk, a walkway lined with different restaurants and shops. It also has plants and a fountain. For MassKara season, the City Walk also displayed the different contingents’ masks and costumes. 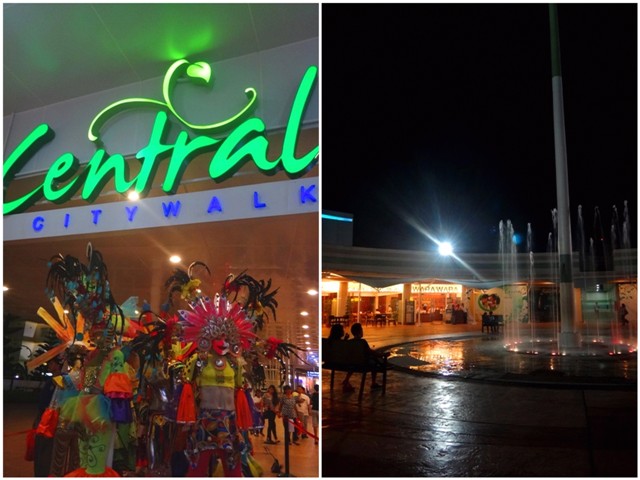 Robinson mall’s City Walk is easily accessible from Go Hotels Bacolod. Aside from its usual attractions like the fountain (right), it also exhibited the different MassKara Festival masks and costumes (left) even after MassKara weekend.

Another convenience in Robinsons is that it has pasalubong centers selling Bacolod’s famous sweet specialties like piaya, a flat unleavened bread filled with muscovado sugar. BongBong’s Pasalubong Center, a popular and commercial outlet of piaya and other sweets, for example, is located right in one of the mall entrances. 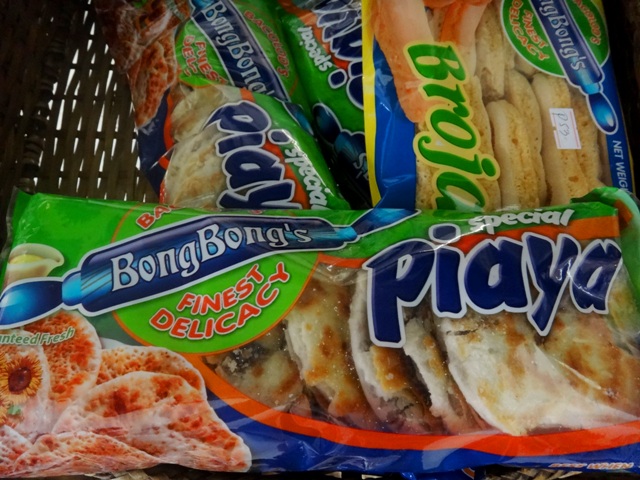 BongBong’s piaya, one of the Bacolod’s sweet treats that can easily be bought at Robinsons

Another pasalubong shop as well as a restaurant and cafe near Go Hotels is Pendy’s, just a ten-minute walk away or less than a five-minute jeepney ride going downtown in Bacolod. Pendy’s is famous for its half moon, a custard cake which assumes the shape of its name.

A five-minute jeepney ride on the side going to the airport, meanwhile, is Roli’s, which is famous for its napoleones, a pastry with thin crunchy layers, a cream filling and a sugar-glazed top.

Of course, Go Hotels is just a jeepney ride away from Bacolod’s major attractions like the Negros Museum. It is easy to commute from Go Hotels to any point in the city. From the airport, it is just 30-40 minutes by taxi or by airport shuttle (Php150).

As with my experience in Tacloban, the staff in Bacolod were friendly and smiling, which is a big plus for me in any place I stay. It is also my first time to learn, upon chatting with one of the staff, that all Go Hotels staff are trained in Manila for several months, and learn well in speaking Tagalog to Tagalog-speaking guests, and English to foreigners. 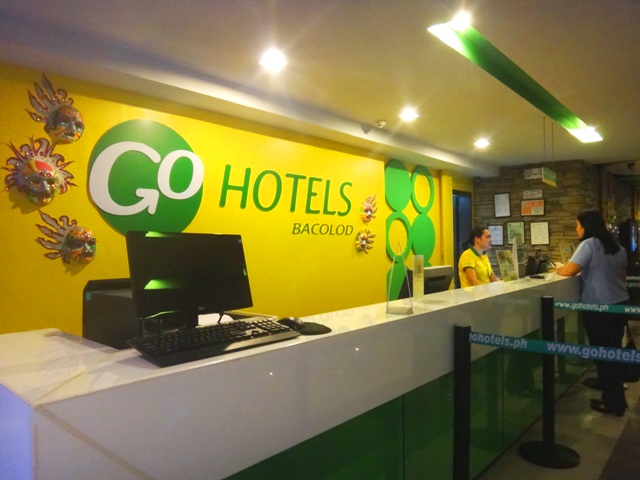 Go Hotels Bacolod’s rooms start at Php688 plus VAT. For its rooms and services, the price is good value for money for a budget hotel.

5 thoughts on “Colors and Convenience at Go Hotels Bacolod”