I woke up at 6 am to the beat of drums from different directions. Here at the Ati-atihan Festival in Kalibo, Aklan, merrymaking starts early and ends late.

An hour and a half later, the parade of competing tribes began. First off were the groups for the Balik-Ati (Return to the Ati) category. This competition is the one most in keeping with the history of Ati-atihan; the group parades in costumes made from natural indigenous materials, as the early Atis would use for their clothes.

The festival, after all, was inspired by the Ati indigenous people, who made peace – after some bloodshed – with the Maraynons from Borneo settling in Aklan during the 13th century. Following the successful peace talks, the Atis and Maraynons celebrated with a feast, and the Maraynons painted their faces with soot in solidarity with the dark-skinned Atis, which explains the black smiling faces every Ati-atihan Festival.

While the Atis do not usually join in the competitions, the contestants in the Balik-Ati category in their own ways try to stay true to the look and ways of the Atis. 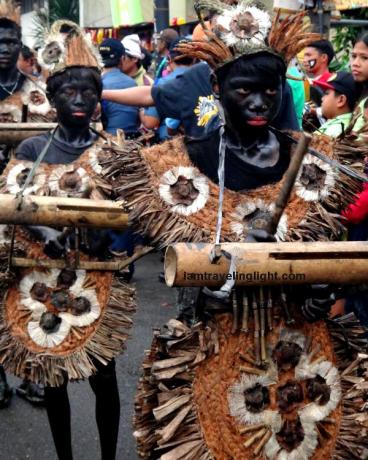 Meanwhile, the other competitions have more relaxed rules when it comes to costumes; the soot-covered face is the only consistent element. Here, the competing groups painted the streets with the colors of the rainbow.

Aside from competing groups, the festival also had competing individuals, who used their creativity to make costumes similar to the Atis’ native wear, or with entirely different and unique themes.

While I enjoyed looking at the costumes, I was a bit disappointed that the competing groups did not have any choreographed dance moves unlike other festivals such as the Bacolod Masskara Festival.

I was to find out later, though, that what the festival might lack in careful choreography, it makes up for in fun and spontaneity.

Aside from the competing groups and individuals, scores of locals in costumes and painted faces – and even bodies! – paraded the streets. 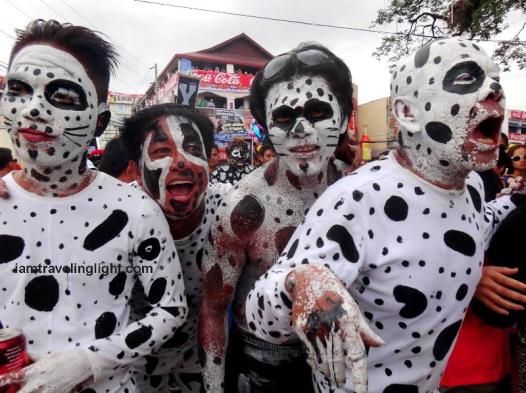 The Dalmatians group, just one of the many groups and individuals in costume at the Ati-atihan but not part of the competition

And it is not just those in costume. Families, organizations, and friends flooded the streets – not just to parade, but to party. You can see them in matching shirts or motifs representing their groups. It was hard not to get infected by their energy. Even while watching them, I found myself occasionally stamping my feet and swaying my body ever so slightly. 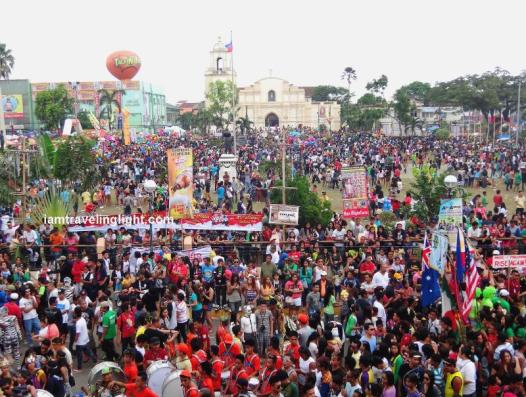 The merry, merry crowds of the Ati-atihan Festival

While most contingents on the streets were there to have a procession and bring an image of the Sto. Niño (the Holy Infant Jesus) to the cathedral, as traditional processions go, the actual procession was anything but traditional. Instead of walking, the locals – joined by tourists – instead of walking, usually do sadsad (short for sayaw=dance and lakad=walk). And, they don’t do it solemnly. There’s cheering, drinking, and lots of picture taking. And of course, a marching band. 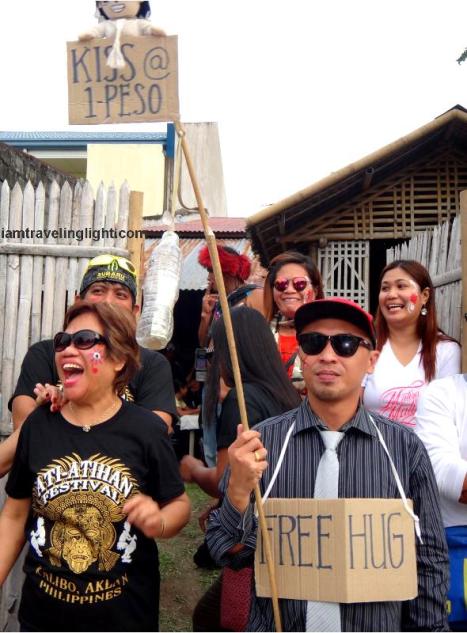 While doing sadsad, our group encountered interesting sights like this.

During Ati-atihan parades, alcohol flows freely. And firecrackers and other noisemaking are not uncommon. 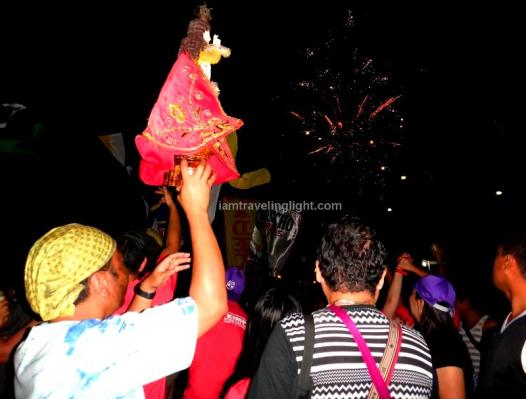 Amid our cheering and drinking, we were further entertained by fireworks blossoming in the sky from time to time.

“At other festivals you can just watch. Ati-atihan is the only festival where you can join in,” Phillip, a local who always makes a point to be present every festival, says with pride.

Indeed, of the six festivals I’ve experienced so far, Ati-atihan has been the most fun. And, this might just be the festival I will make a point to experience again. I invite you to experience it yourself to understand what I mean.

The Ati-atihan Festival takes place every third week of January in Kalibo, Aklan. Highlights, like the parades of the competing tribes, are on the weekend.