My travel buddies and I were tired but happy after our full day of exploring Five Fingers’ islands, now becoming a well-known summer destination. The tour in Mariveles, Bataan had taken us through grassy hills, rugged cliffs, and pristine beaches. Good thing our accommodation was only around 10-15 minutes away from the jump-off and docking point for a Five Fingers tour.

Grassy hills browned by summer, rugged grey rocks and cliffs, and blue seas and lagoons were the sights we took in this weekend at Five Fingers in Bataan. We were guided by the group who "discovered" and named the place, named as such as the rocks and hills look like fingers from a bird's eye view. I recommend #FiveFingersMarivelestour guides affiliated with Bataan Weather Page as they are the ones who have been doing it for the longest time. #FiveFingers #BataanWeatherPage #iamtravelinglight

The Oriental Bataan hotel is perched on a hill and is also just a short tricycle ride from the Mariveles bus terminal, and around 40-45 minutes away from the ferry station in Orion municipality. Being on a hilltop, it offers sweeping views of Mariveles’ mountains and bay. It also has a courtyard pool perfect for relaxing after a long day of island hopping.

I love the old balete tree that seemed to greet us upon arrival. I would later find out that the hotel grounds has many beautiful trees, some of them blooming with bright colors. 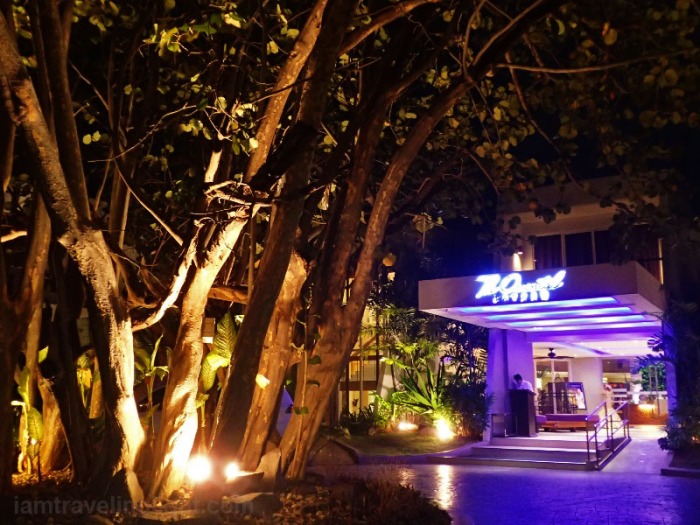 The Oriental Bataan hotel with an old balete tree out front 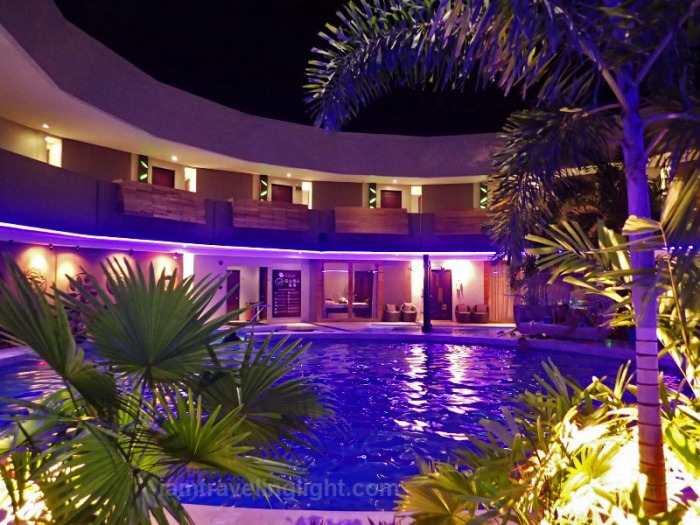 The circular pool at the courtyard looks inviting after a long day of island hopping.

The people at the reception greeted us with bows and smiles. The bows, I would later learn, is part of The Oriental Bataan’s Thai signature and training, which can also be found in the hotel’s spa and in some of its interior design and cuisine.

Hotel staff bow at guests in welcome and courteously attend to inquiries.

Our room (cellar twin) was located at the poolside, making swimming even more tempting. (I did go for a quick dip before dinner.) 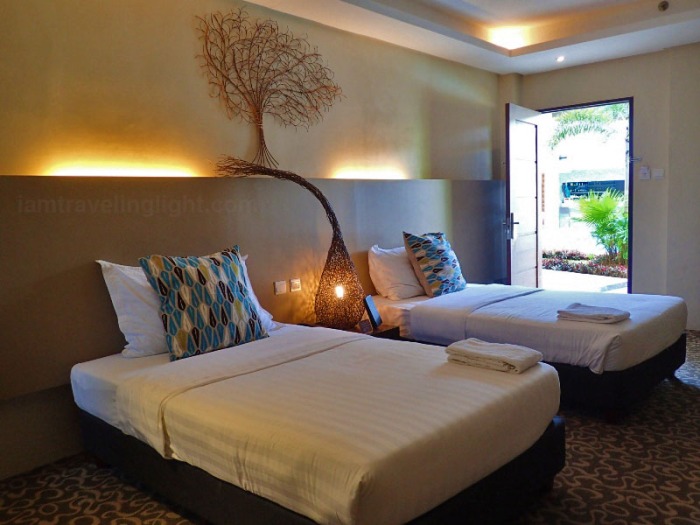 Most of our group’s rooms were  conveniently located by the pool.

I love the nature-inspired design in our rooms.

We had a filling dinner at the hotel’s Kulinarya buffet, which is said to be the biggest buffet in Bataan, available on Wednesday, Friday, and Saturday evenings. There was a salad station, a barbecue station, stations on Pinoy and other Asian food (like Japanese and of course, Thai!) and dessert station, among others.

Kulinarya at the hotel is Bataan’s biggest buffet. Pictured above is just a few of the buffet’s selections.

We were also able to squeeze in a birthday surprise to three friends celebrating their birthdays on March. The hotel staff gamely helped us orchestrate the surprise, with cakes and dedications we chose from the hotel’s restaurant Cocoon.

The birthday celebrants with their yummy cakes, which our group shared after the singing.

Going around for a quick walk after dinner, I took in some of the hotel’s artwork and grounds. I later found out that some of the art and in the hotel is made from reclaimed wood and materials from other parts of the hotel when it was renovated. Thumbs up for this environment-friendly effort!

This art installation is made from reclaimed materials when the hotel was renovated.

Walking around, I saw that the hotel also has an outdoor bar and restaurant. This has a view of Mariveles town’s lights.

I found there’s also a bar by the pool!

The next day,  I woke up early to take a walk – longer this time – especially to see the hilltop views. At daytime, I was also able to appreciate the hotel’s architecture more, which I later learned was called Brutalist architecture characteristic of the ’50s-’70s, an example being the Cultural Center of the Philippines and its wide expanses of concrete.  The Oriental Bataan was in fact originally called Hilltop Hotel, accepting guests around the ’70s and ’80s.

The balete and The Oriental Bataan hotel entrance during daytime

While the hotel is mostly white concrete from the outside, The Oriental Bataan to me looks unique for its shape, which looks like a polygon of more than ten sides. 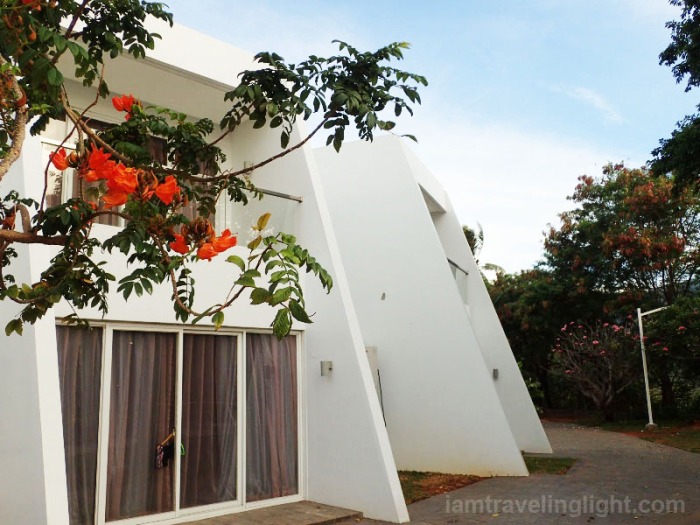 The hotel looks unique to me because of its shape, which has more sides than an octagon.

I love walking around the hotel’s perimeter, more than half of which is surrounded by trees. 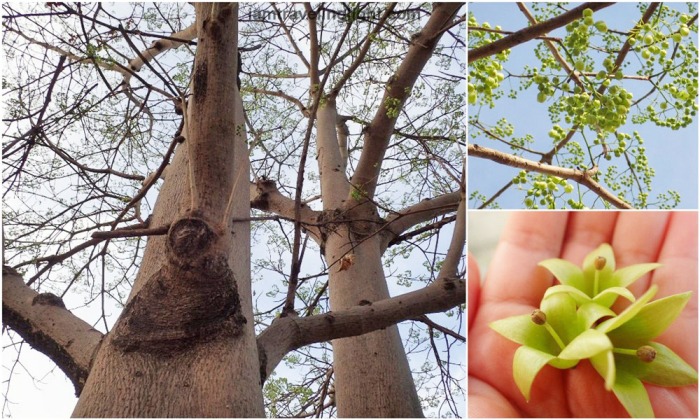 My favorite tree in the hotel grounds. What I thought were tiny green leaves were actually flowers!

The views of Mariveles’ mountains and bay are calming. 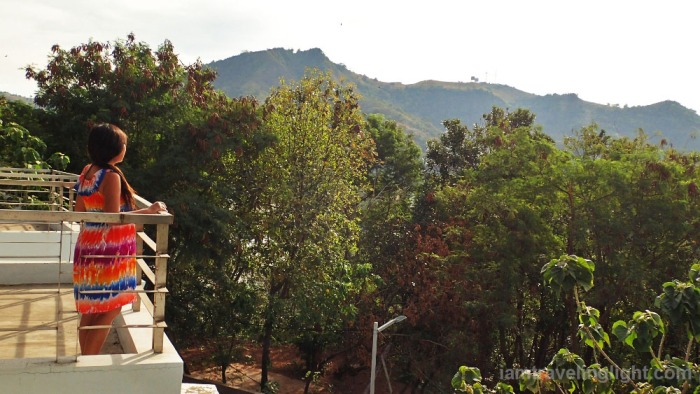 Mountains in the distance 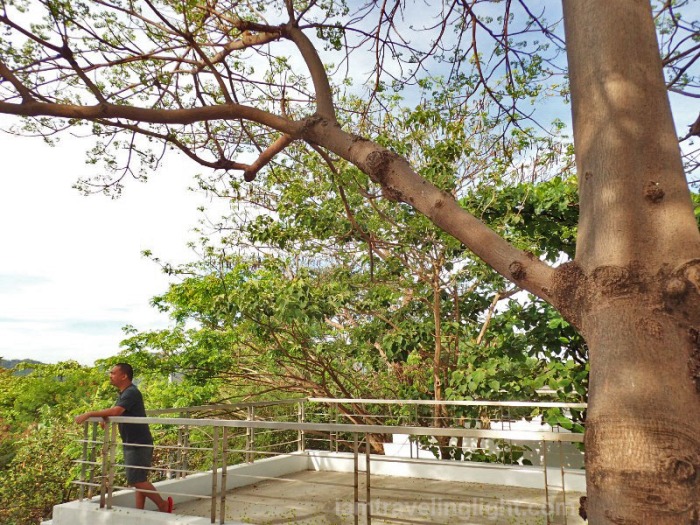 On the other side of the hotel I also found teambuilding facilities, a playground, and an herb garden. The rooms actually have floor-to-ceiling windows that lead to these, including to the trees I had been admiring.

On the way to breakfast, I was also happy too see the Cliff Lounge, which, as its name suggests, seems perfect for just lounging around. 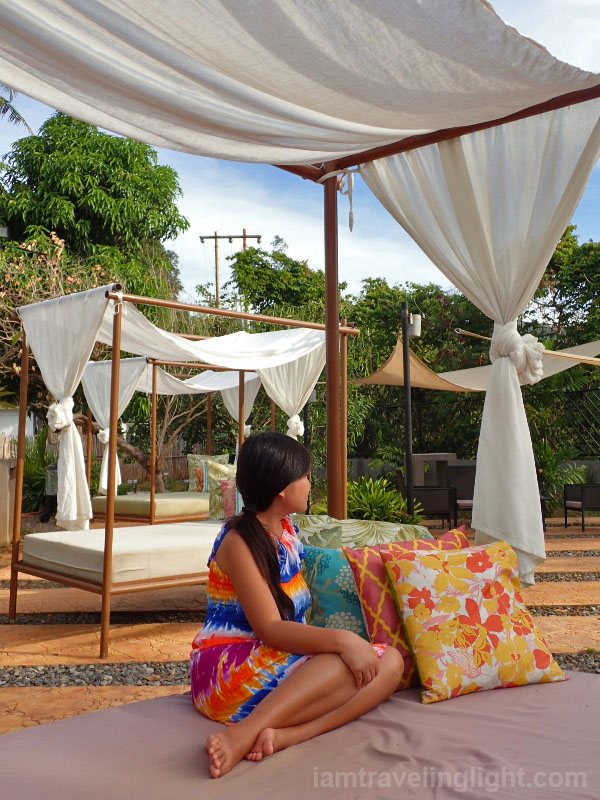 The buffet breakfast is on the same venue as our dinner buffet the night before, with selections of Filipino and foreign cuisine.

We walked around the hotel more after breakfast. I discovered a fun fact – the hotel’s “third and fourth floors’ are in fact below the first floor but still have the garden and daylight outside probably because of the sloping grounds.

Exploring the third and fourth floor. We found the gym here, too!

We then went for a swim at the pool, which I believe is a must-try if you are checked in at this hotel.

The pool early in the morning, which I passed in my morning walk 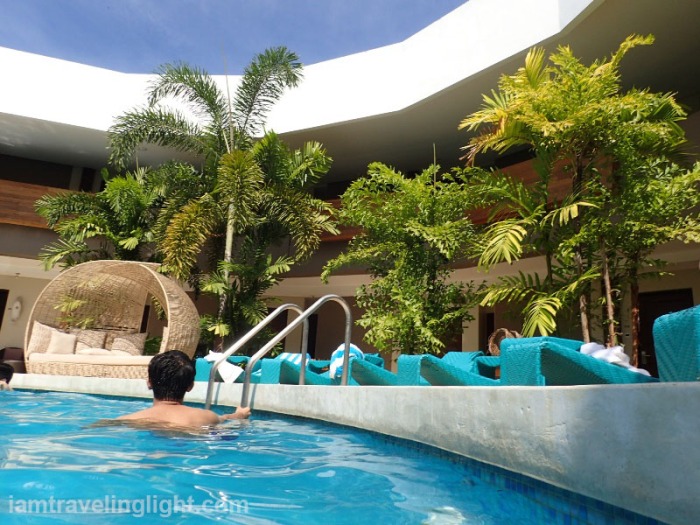 Swimming in the pool, which has depths for both kids and adults, is relaxing.

Prior to lunch, I also checked out the outdoor spa, which has an entrance by the poolside.

It also has a pool for a relaxing dip!

We had lunch at the hotel’s Cocoon restaurant, which serves delicious Asian food.

Love the Cocoon’s interiors. Some parts of the restaurant are made from reclaimed wood. 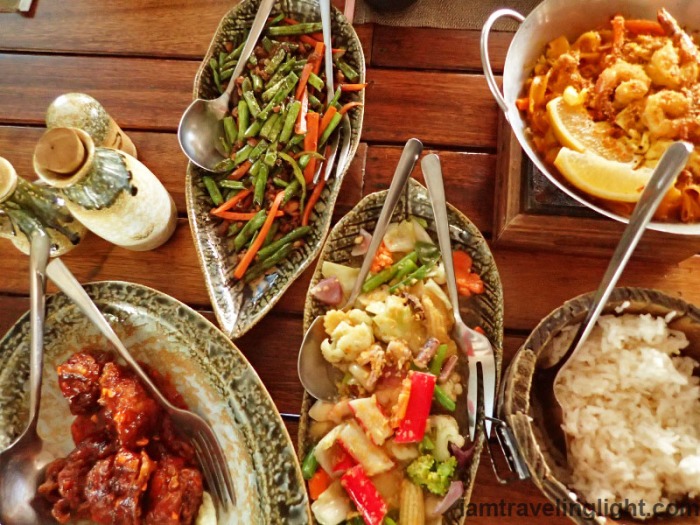 Their drinks and desserts are also amazing! On top right is the blue moringa lemonade, and bottom left is cucumber juice. On top left is a closeup of the pad Thai, and on bottom right is our dessert – lava cakes.

After leaving the hotel, we also checked out Oriental Bataan’s other properties – the convention center which is along the hill going down, and the dormitory around ten minutes away which is open for long-staying guests.

The Dormitory by Oriental. Its rooms has a touch of their hotel design. I love their courtyard (left photo).

The hotel has an ongoing promo especially for advanced bookings. Promo rates usually start at Php3,040 good for two inclusive of taxes (Regular rate is usually Php3,800), with a complimentary buffet breakfast and free transfer within the Freeport Area of Bataan and Mariveles Bus Terminal. The rooms also have Wi-Fi, cable TV, hot and cold shower, bath essentials, electronic in-room safe, free bottled water and in-room coffee and tea-making facilities. Guests can also use the swimming pool and the gym.

The hotel also has Kulinarya Dinner Buffet, said to be Bataan’s biggest buffet, which happens every Wednesdays, Fridays, and Saturdays from 6:00pm to 10:00pm for Php488.

How to get there:

Take a ferry from Mall of Asia Esplanade Terminal to Orion, Bataan. Travel time is less than an hour. Rate is Php450 if booked online (Will be writing about our ferry experience soon). From Orion terminal, ride the free shuttle (around 40 minutes) going to Mariveles. Ask the drivers of the vans you will find in the terminal. Ask to be dropped off at Afab then ride a tricycle to The Oriental.

Alternatively, you can take a bus to Mariveles from Cubao (around Php280, for around 4 hours), then a tricycle to the hotel.

3 thoughts on “Where to stay after a Five Fingers island hopping tour: The Oriental Bataan hotel”