A pawikan hatchling release in Nagbalayong

Every morning or afternoon, around November to February on the shores of Nagbalayong, Morong, in Bataan, turtle hatchlings touch their flippers on the sand – on earth – for the first time, and begin the long crawl to their home, the sea. Locals, particularly Bantay Pawikans (Sea Turtle Patrol), release these baby turtles, each usually no bigger than a fist, with care and reverence. It is a moment of triumph, after they have looked after these turtles when they were still eggs for the past month or so. Occasionally, tourists like me would watch in awe, as the turtles crawl to meet the sea, and swim energetically once they reach it. During the Pawikan Festival every November, more tourists would come to watch these hatchlings’ journey home.

Pawikan hatchlings are no bigger than a fist.

This was not always so. Decades ago, pawikan eggs would end up in households’ pots, according to Bantay Pawikan Chair Manolo Ibias. They were a delicacy, and also a source of livelihood. Back in 1999 and earlier, pawikan eggs would sell for double the price of chicken eggs, making them a prize catch for poachers. Mang Manolo himself was among those who eagerly took these eggs to bring home to his family.

When the Department of Environment and Natural Resources and the NGO Philippine Rural Reconstruction Movement identified Nagbalayong as a turtle nesting site, they talked to the locals and held seminars to show pawikans’ importance, their alarmingly declining numbers, and the laws prohibiting their capture.

Among the seven marine turtle species around the world, five can be found in the Philippines and three in Bataan: the olive ridley, green turtle, and the hawksbill. All these three are endangered.

Among other things, pawikans keep the balance in the ecosystem by feeding on sea grass and keeping seagrass beds healthy. Seagrass beds are important as fish usually stay here for part of their life cycles.

Many locals were won over by the pawikans’ story, and the poachers themselves became Bantay Pawikans, collecting eggs for hatching and releasing, and rescuing turtles. The Pawikan Conservation Center was built in 1999, which Mang Manolo has been managing for the past 17 years.

Seeing his first turtle hatchling was an unforgettable moment for Mang Manolo. “1999 non at 47 years old ako. Ni minsan sa 47 years ko bago non ako nakakita ng inakay. Nung pinrotektahan na namin saka lang ako nakakita,” he said, his voice thick with emotion. (It was 1999 and I was 47 years old. Not once in my 47 years did I see a baby turtle. When we protected [the turtles], that’s when I saw my first hatchling.)

Protecting pawikans also became a source of pride and accomplishment for the Bantay Pawikans. “Nakakawala ng pagod pag sinasabi ng iba na ang galing namin magprotekta,” Mang Manolo said. (Our tiredness disappears when others tell us we are so good at protecting [pawikans].)

It also became a source of their joy. “Pag marami kaming nakukuhang itlog tuwing gabi para alagaan, natutuwa ako. Mas maraming pawikan ang mabubuhay pag ganon. Pag konti ang nakukuha namin, nalulungkot ako,” Ato Angeles, one of the first Bantay Pawikans, told me, his eyes shining. (If we got a lot of eggs at night to look after, I feel happy. It means more pawikans will live. If we get only a few, I am sad.) 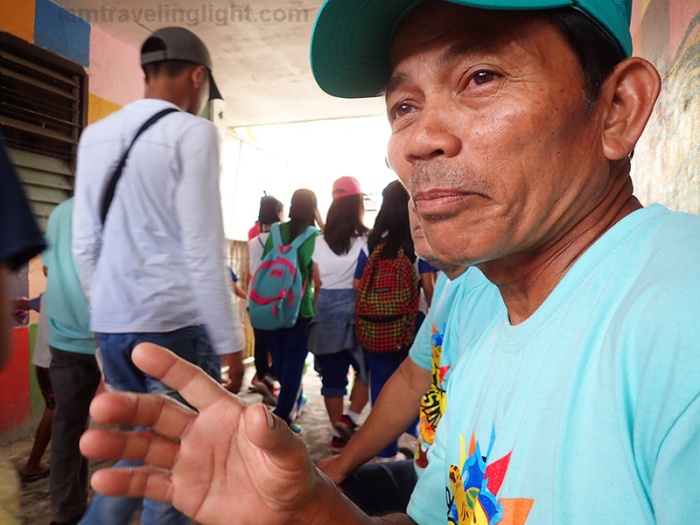 Old-timer Bantay Pawikan Ato Angeles is happy whenever they collect many pawikan eggs for hatching and release.

The odds are in fact against pawikans’ survival, with sea predators, global warming, plastics in the sea and other human interventions. Recently I just found out that around the world, only 1 in 1,000 marine turtles live up to adulthood. Mortality is high especially on the first year. In the Philippines and in neighboring areas in the Coral Triangle, only 1 out of 10 hatchlings survive after turning one year old. (RELATED: If You’re Born a Sea Turtle, the Odds Are Never in Your Favor) 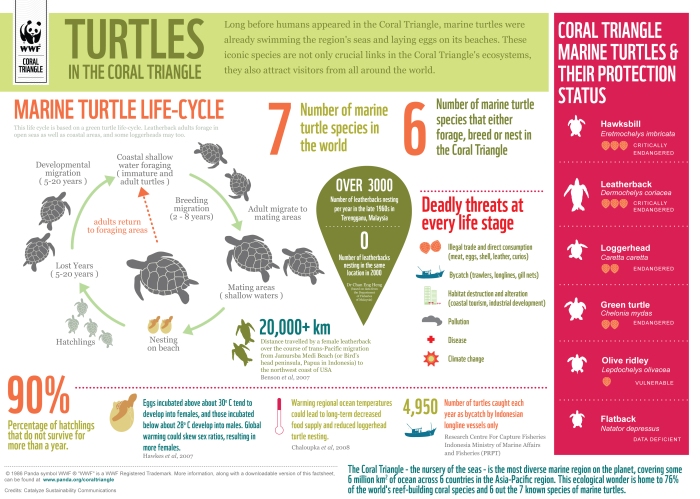 Caring for eggs and releasing turtles is indeed an act of faith. Despite turtles’ grim survival statistics, Bantay Pawikans like Mang Manolo and Mang Ato push on with their work, knowing their efforts would still make a difference.

Now, when I see another full-grown pawikan, I will watch more closely, with more reverence, knowing that this is among the rare, the one in 1,000 who have survived the odds – probably with a little help from conservationists before Mang Manolo and Mang Ato’s time.

One of the “1 in 1,000.” Photo taken at Apo Reef, Occidental Mindoro. Read more about my Apo Reef adventure here.

I would also like to think that pawikans have great faith, too, or at the very least, a strong sense of home, even though they may not be sure if they have a home to return to (Sadly, many turtle nesting sites have been overrun by development). Once female pawikans reach maturity in 25 years of so, they come back to where they were born and lay eggs there. So, 25 years or so from now, adult pawikans would come back to Nagbalayong to lay their eggs. Those who in fact are laying eggs in Nagbalayong now were born there.

Working for the conservation of pawikan indeed requires great faith; living as a pawikan requires even more.

Below are some photos of the Pawikan Conservation Center to give an idea of what visitors can see during a tour and hatchling release. A tour and release can last as little as 30 minutes.

Entrance to the Pawikan Conservation Center

Upon entering, you will see a turtle-shaped pool with rescued pawikans. 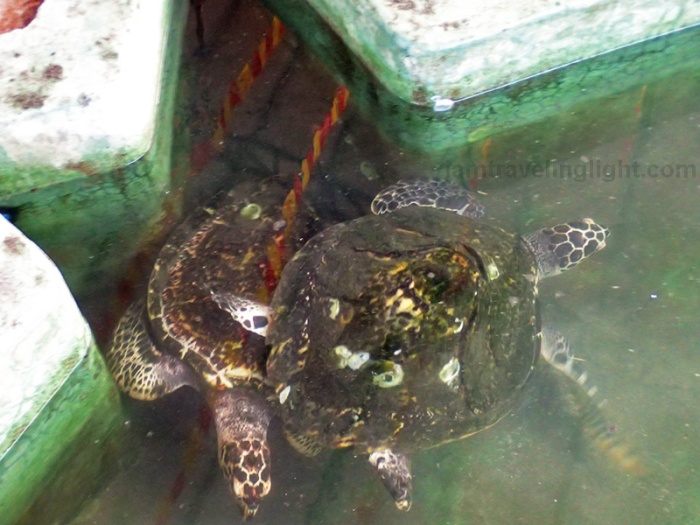 Rescued pawikans. The bigger one is a permanent resident as it has been deemed unable to survive in the wild after rescue; the other is recovering from a flipper injury and is due to be released anytime soon.

Farther down is the hatchery for marine turtle hatchlings

Also at the center is a diorama showing the life cycle of a sea turtle.

There are also posters with information on the pawikan like this. 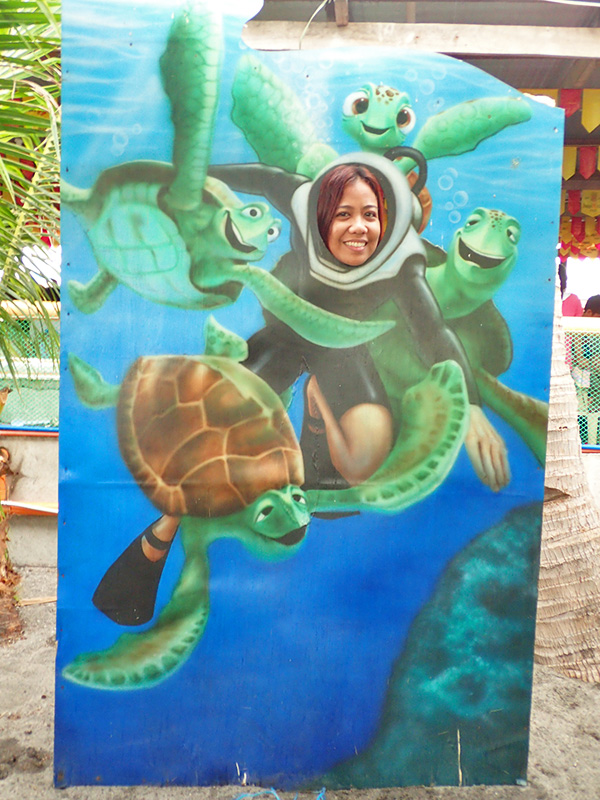 You can also take a photo in a peek-a-boo mural!

Some notes and tips for tourists:

How to get to the Pawikan Conservation Center:

From Manila, ride a bus bound or passing by Balanga. Fare is usually P200. From Balanga, ride a mini-bus to Morong. Then, from Morong town proper, ride a tricycle to the conservation center. Total travel time is around 4 hours or more.