“You should go there – it’s beautiful, and looks like Scotland.”

These were the words the tourism officer for Catbalogan, the capital of Samar province, told me. I had no idea what he meant, but my curiosity was piqued. I only know Samar for its caves, waterfalls and beaches, so what place could he be referring to?

That afternoon, I found myself amid mountains and trees in Buri Island. I thought at first we were headed to Buri beach, which I heard was one of the most beautiful beaches in Catbalogan. However, the tricycle took the mountain road.

Minutes later, the owner of the place I was headed to, Gerry Muñoz, led me to the foot of a hill. I looked up and found a house right on top of the hill. Make the sky blue and the scene would be picture-perfect. It was a cloudy day when I went, which nevertheless made the scene still beautiful.

House on the hill. Reminds me of postcard pictures, though with the sky blue.

When we got to the top, the scene was just perfect. A wide expanse of blue-gray that was Maqueda Bay, green islands, and white clouds. And all these could be enjoyed while lying down on the hammock. A white fence secured the hill, which, instead of looking out of place, actually complemented the house and the scenery.

Gerry showed me where Catbalogan’s town proper was, which just looked tiny from where we were. I also saw some other islands of Samar.

The view near the top of the hill is already something. 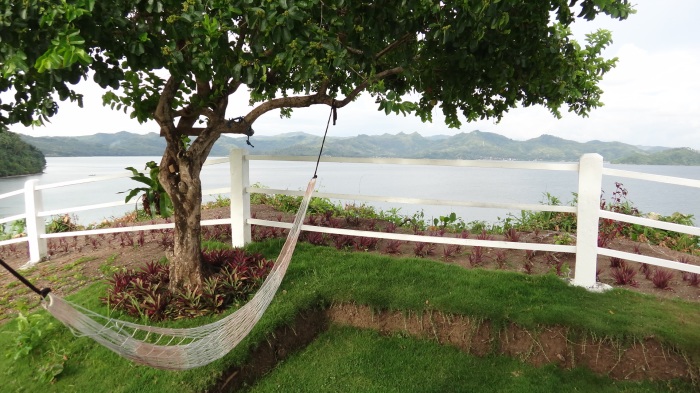 View at the top

Samar’s mainland and some islands

The house – actually a villa – was understated but charming, and had modern comforts like wireless Internet and a flatscreen TV. 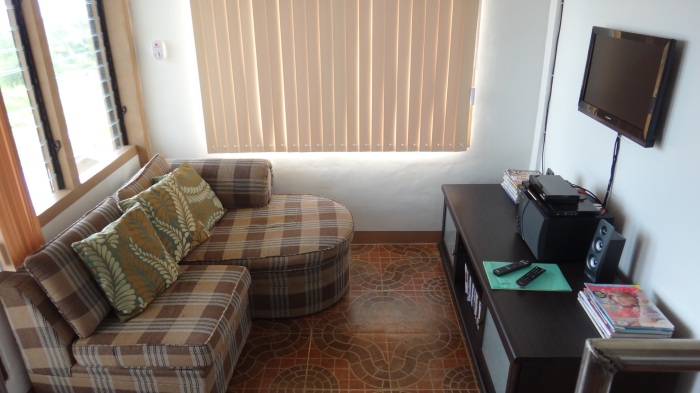 Some of the villa’s creature comforts

I could see myself on the hammock all day, watching the sun rise and the colors of the bay and sky change throughout the day, doing nothing in particular. Maybe read a book. But no – this is just not a place where I would curl up in the hammock and read a book. This is where I would write my book, if ever I get to write one, which I hope to do one of these days. The Internet access would allow me to research information I might need, and the beauty of the bay and the feeling of being in the middle of nowhere would give me the privacy I need to write uninterrupted. Of course, some writers would say that any day is a good day to write, but to writers looking for a place conducive for writing and who have some resources for a solitary retreat, this place is a haven.

As I was there only for the afternoon, I contented myself with lying on the hammock and staring at the bay.  Time stretched and lost meaning as I lost myself in blue, green and gray. My near-trance was only broken by my cell phone’s alarm clock, which I had set to help me keep track of time precisely for moments like this. 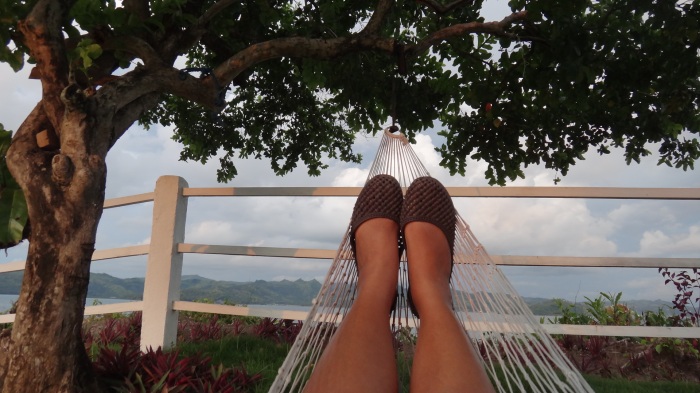 “Doing nothing” at the hammock

I went down the hill and walked to the nearby hill, where Gerry’s and his family’s house was. The view from there was also as beautiful as from the villa.

With the owner at his “backyard”

Gerry told me the sunrise from the bay was enchanting. I knew I would not see it that day, but I was treated to a view of the sunset from the other side of the villa. 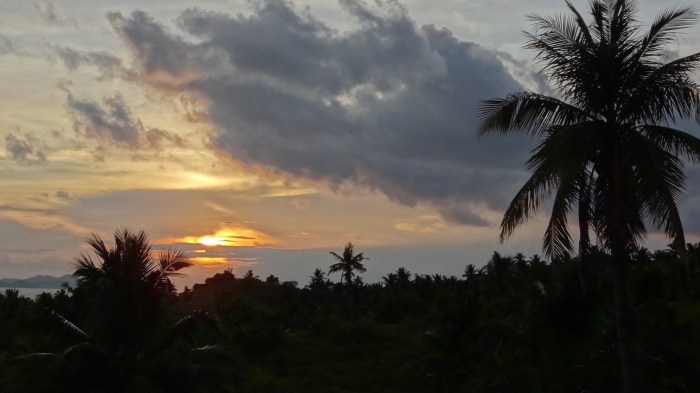 Sunset from the treetops

Having not yet been to Scotland, I could not really compare the view at Buri Island Villas. But I could understand what leaves people spellbound. For me it was the magic of the bay, the landscape, and the simple architecture which fit in so well with nature.

4 thoughts on “A Place to Write and Do Nothing”