Our plane was about to land. I looked out the window, expecting to see city lights. Siem Reap was, after all, a city. Instead, I only saw blackness dotted with occasional yellows and whites. I later found out that the blackness was one of Siem Reap’s vast lakes.

A tuktuk driver picked me and my fellow bloggers up at the airport. I was pleasantly surprised to see that the Cambodian tuktuk’s body is similar to the traditional, now rarely used horse-drawn carriage (calesa) in the Philippines.  While tuktuks run on motor, their carriages have that charming, old-village feel.

(Left) Tuktuk in Cambodia (Right) Calesa in the Philippines

The tuktuk took us through the darkness, amid fields and tall grasses on either side of the road. I inhaled the scent of dew and grass in the night air. Eventually, the blackness gave way to the lights of hotels and outdoor restaurants. I could not help smiling when I saw a hotel named “No Problem Villa,” which, I found out later, was owned by a Khmer (Cambodian).

This villa just almost sums up my first impression of Siem Reap.

Indeed, it looks like no problem or stress bothers Siem Reap, which I slowly realized in the next few days. This was a land of lakes, green fields, lotuses, and temples. There were no high-rise buildings or traffic jams from too many cars – instead, the ubiquitous bicycles, motorcycles and tuktuks were the stars of the road. 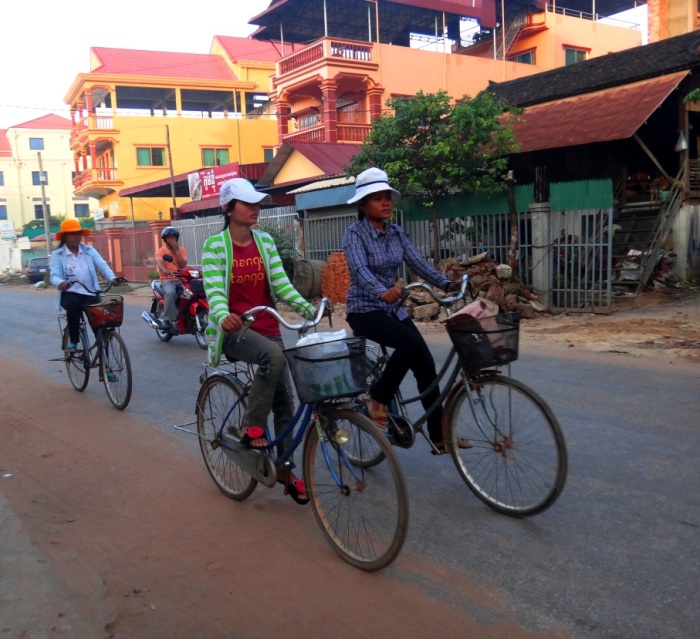 Locals biking in the city

To me, the most striking example of this laidback feel in Siem Reap is the seeming hammock culture here. On the way to Tonle Sap Lake, I marveled at open-air huts with these twenty or so colorful hanging nets, just a few meters apart of one another.  A local confirmed to me later that this setup was common near lakes.

My first meeting with a multitude of hammocks was in Malob Rousey restaurant near West Baray Lake. Their bright oranges, blues, and whites stood out against a grayish hut.  Khmers and I rocked contentedly in them and gazed at the surrounding rice fields and trees. Lunch was served on a woven mat, where we sat cross-legged, eating, laughing and telling stories. And then they lay on the hammocks again.

I snuck a look at the other local customers in the restaurant. They were doing the same.

Khmers sure knew how to relax. 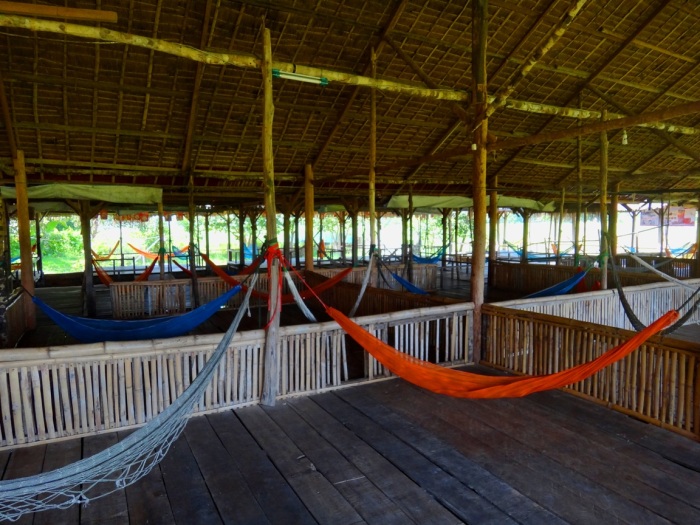 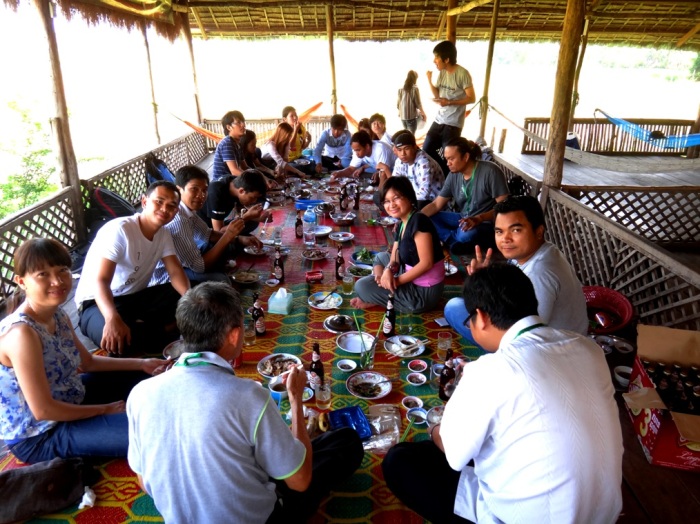 A lazy lunch on the mat

Imagine my surprise, though, when I also saw Khmers stretched out languidly in hammocks at roadsides. In the city. 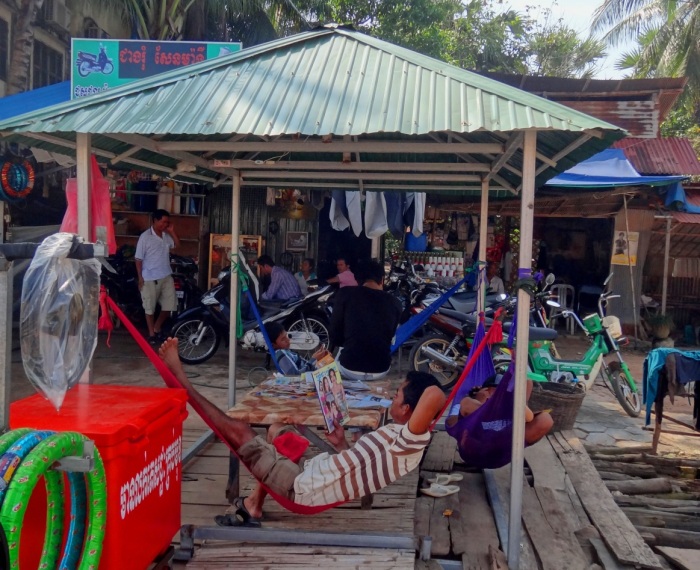 In the Philippines, I have been so used to seeing hammocks just at beach resorts, spas, rural areas, and places I associate with relaxation. And they were not exactly so many as in Malob Rousey. To me, lying in a hammock = relaxing without a care in the world. And those Khmers I saw in the hammocks perfectly embodied that concept. Except they were in the middle of the city.

Khmers, without a doubt now, knew how to relax.

And, at no time did I sense a feeling of stress or worry in them. Though I saw many of them rushing in their work, they did not look overwhelmed. Most of the Khmers I talked to – the tuktuk drivers, the vendors, the hotel receptionist, and the volunteers for the BlogFest Asia conference I was attending – have ready smiles on their faces.

Young locals from Phnom Penh and Siem Reap also explained to me that Khmers know how to take their well-earned rests. Overtime work is rare for employees. If work ends 5 pm, they go home 5 pm or go out to relax.

Not that they don’t work hard – they do, and with admirable energy and patience. I see it in the vendors riding bikes early in the morning to peddle their wares, and tuktuk drivers who keep calling “Tuktuk, tuktuk!” to tourists late in the night. I see it in their delicious fish paste prahok, which requires the painstaking catching of tree ants to give the seasoning a unique tartness.  And I see it in people selling in the day and night markets, particularly one enthusiastic woman I met who lovingly and meticulously gathers fruits, leaves and flowers, and dries them under the sun for tea.

Biking for the first sale

Khmer native paste prahok. Do you see the red ants?

Maly from the night market and her tea made with love

And, there are Khmers who purposefully combine work and relaxation. Some vendors set up stalls with hammocks so that they can rest and recharge there during breaks. Turned out that most of the hammocks I saw in the city were set up like that.

Looking at the Khmers now, it is difficult for me to imagine that just a little over thirty years ago they experienced the horrors of losing close family members to mass killings – by fellow Khmers. I see articles online saying how Cambodia has not “fully recovered” from the trauma. Several friends who are counselors have told me before how deep emotional wounds can persist throughout several generations. And so, even young Khmers will bear the pain of their families’ tragic pasts. But the way they smile, the way they work hard almost tirelessly, and the way they relax with gusto are hints to me that maybe, just maybe, they are bearing and healing the pain – if any – beautifully.

Or at least, that is my fervent wish for these beautiful people who have showed me how it is possible, even for a moment, to truly relax and feel that there are “no problems here.” 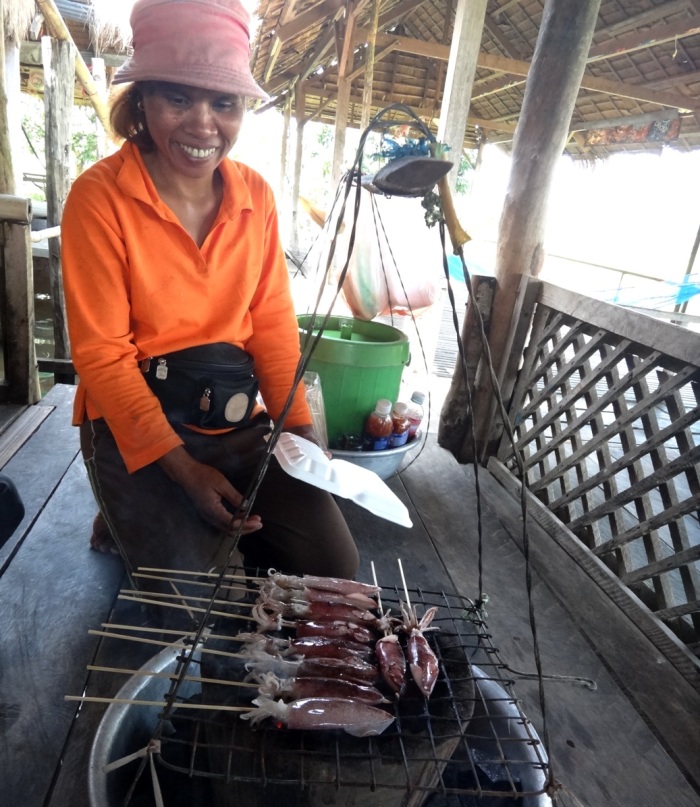 Note: This is my entry to BlogFestAsia‘s “Impressions of Siem Reap.” This article was written after staying two and a half days in Siem Reap.

Leave a Reply to Ephraim | The Adventist Adventurer Cancel reply