She answered with a resounding, unfaltering yes.

Several years ago, I would not have believed her answer. As with many Filipinos in Metro Manila, I believe, I grew up thinking that Pasig River was synonymous to pollution. The only color in the gray, sometimes almost black, was the trash choking it. A stench that make passersby cover their noses rose from some areas. It was difficult to imagine that this was once a clean and living river, and a major transport route in Manila.

A few years ago, though, a friend working at KBPIP kept talking passionately about her work, and at one time even showed me and other friends photos of Pasig’s esteros before and after cleanup. In the “after” photos, instead of trash, there were trees, shrubs and flowers. Homes were painted bright, in contrast to the houses I saw before, which looked like they were about to fall apart. My friend also talked about the River Warriors, locals living by Pasig’s esteros and working hard to clean them. Her enthusiasm was infectious, and I thought Pasig might have some hope after all. 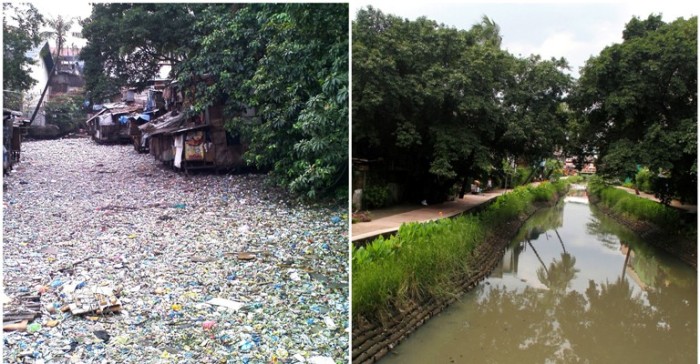 Pasig River’s Estero de Paco before and after cleanup. Photo from ABS-CBN Foundation.

It was only last year, though, through the invitation of another friend from KBPIP, that I was able to see the river’s transformation myself. With other curious bloggers, I walked along the successfully rehabilitated Estero de Paco, and Estero de San Miguel, currently being rehabilitated. These were what I saw:

Pasig River’s Estero de San Miguel. It looked so peaceful I thought it could not be part of Pasig. 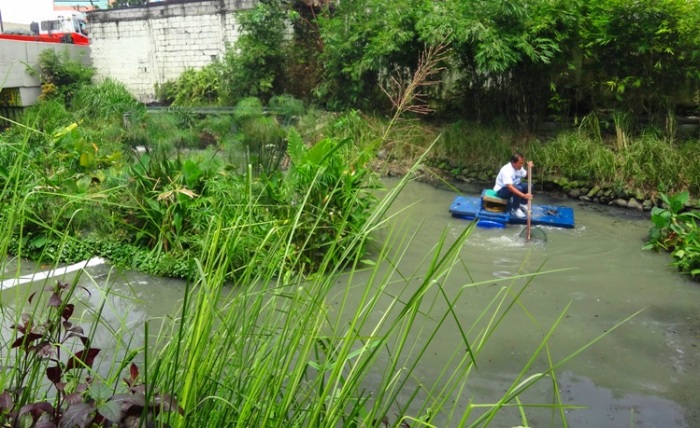 The plants in the middle are not just for aesthetics. They are purifying plants that clean the water. 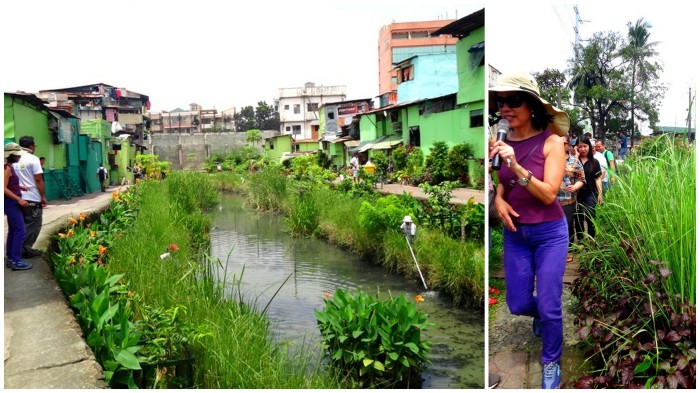 (Left) The colorful houses in the neighborhood of Estero de Paco. Spot the River Warriors at work here too. (Right) Gina Lopez leads the walk through Paco. 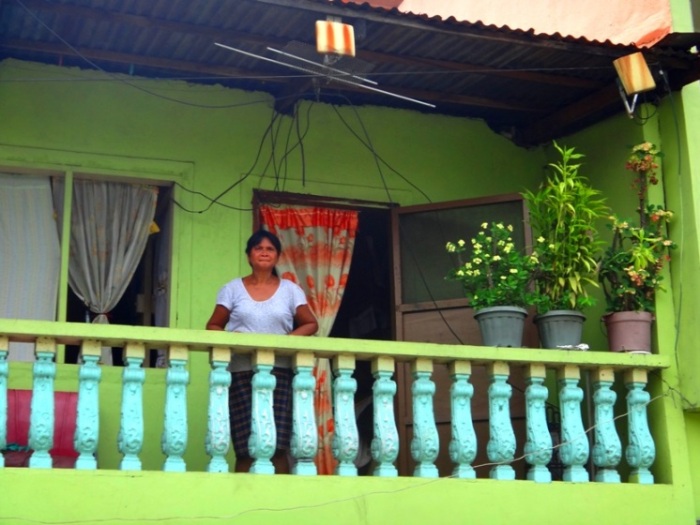 An Estero de Paco resident looks on from her home’s balcony.

This house, with its plain walls and bright greenery, caught my eye as we walked along Estero de Paco.

A KBPIP survey among 7,000 households along Estero de Paco showed an improved quality of life since the rehabilitation. “100% are getting more exercise, 97% have greater sense of community pride, 97% are satisfied with their lives, 89% feel less sick, and 89% feel safer in their community,” states a KBPIP report.

Indeed, as I walked along the estero, I noticed friendly and smiling residents, River Warriors tirelessly at work, and the general peace and quiet in the area, save for some rowdy kids who only made the area alive.

KBPIP is hopeful in cleaning Pasig River one estero at a time. After Pasig is cleaned, its future as a tourism attraction is a possibility. “Locals can paddle boats through the esteros and visitors can ride on them,” Lopez said. Tourism will also boost livelihood for locals. For now, though, cleaning is priority.

Because of what I’ve seen of the rehabilitated Pasig River so far, though, I am hopeful for its future. Manila is known to tourists for its heritage structures and culture – would not it be nice for it to be known for natural attractions like Pasig River, too?

Or, at the very least, it can become a major transport route again like Bangkok’s Chao Praya River. There was a Pasig River ferry service before through the main water way. I was happy to try it a few years ago before services were suspended because of financial losses. The Department of Transportation and Communication said last month, though, that it will resume the ferry trips, but with smaller boats.

While I am not sure if a cruise or boat ride through Pasig River will equal a cruise through, say, the famous Loboc River in Bohol or the lesser-known but idyllic one in Palina, Capiz (Pasig River, after all, is still in a city, not in the province), I have hopes that Pasig River will eventually become a tourist attraction Filipinos will be proud of.

One more River Warrior at work, among the hundreds of these dedicated warriors