Before I met you, I was already in love with you. I heard from friends and learned from blog entries like this that you are an unspoiled paradise of powdery white sands and crystal clear waters, quiet and uncrowded, just like Boracay before its commercialization.

And when I finally went to see you last weekend, I fell in love all over again. Even before I saw your famed stretch of white beach, you treated me to an expanse of rolling green hills punctuated by blazing red hills and dark rock formations.

And as the boatman steered me and my companions to Mahabang Buhangin, I realized that you are as postcard-perfect as I saw you in photos – waters so clear they reflect the blue of the sky, and pure white sands.

True, you are not as uncrowded as I expected – I now saw several boats docked on your shore and groups of people setting up camp. Still, your sands are large enough for each of us to have our own spot of paradise. And yes, though your shoreline is not as long as I expected – your “long beach,” is just around a kilometer or less – I was still smitten with you.

And, for people like me who love walking barefoot on the beach, your powder-fine sands are just perfect.

I was more than happy to rough it – camping on the sand and bathing in an outdoor common area – if it meant a weekend of paradise. Yes, there was an island fee we had to pay, but I believed that if it would be used to maintain your beauty and help the livelihood of your people, the Php 75 fee was worth it.

But then, in the middle of Mahabang Buhangin, I learned the island fee was Php170, and I wondered why, though I saw their cottages there looked more developed than the makeshift ones we had at our area, near the end of your stretch of white sand.

Anyway, I was happy to stay where we were, where the white sand ended as soon as a dark grey cliff blanketed with a jewel green forest rose to the sky. Exploring the foot of this cliff, I was surprised to find that what I thought were rocks from a distance were actually a garden of corals. And though I did not find Nemo, I saw fish of different colors. At low tide, there was no need to snorkel or use an underwater camera to take photos. Again, I felt like I was in an isolated paradise. 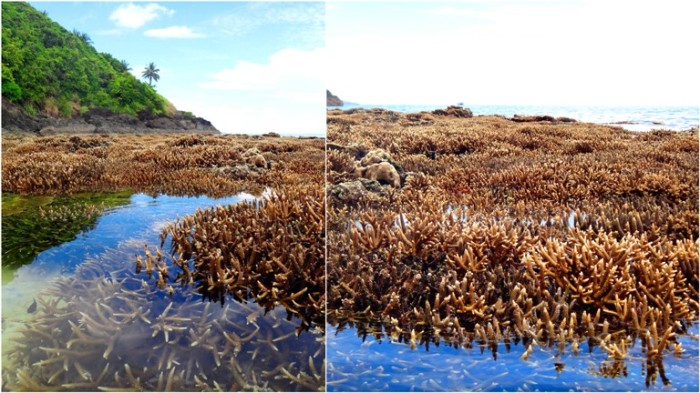 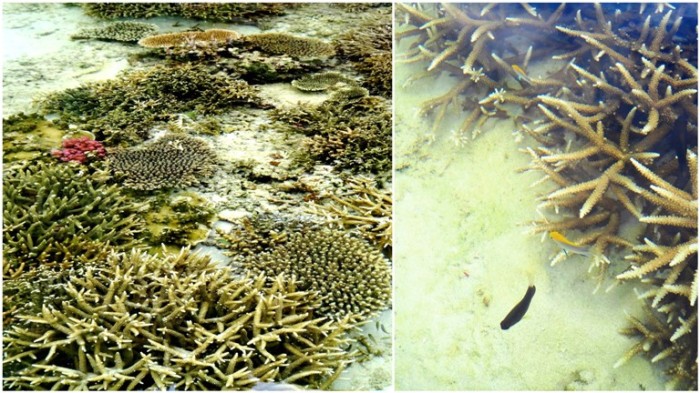 Also, as long as the skies are clear, you promise both breathtaking sunrises and sunsets. I realized that either is more picturesque when viewed from one of your hilltops. 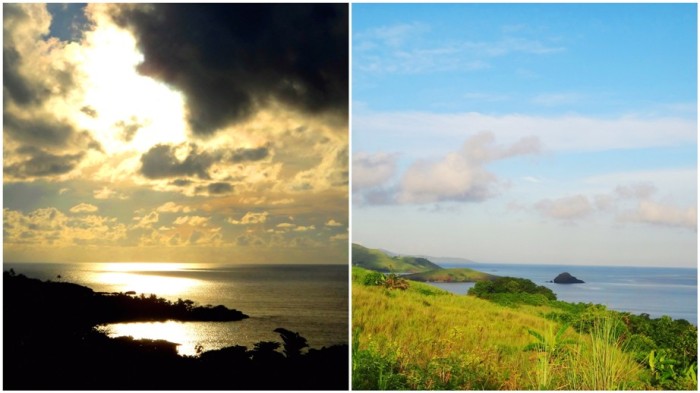 And, when I got the chance to talk to your people, I was smitten too. They remind me of the warm, friendly locals I met at Higatangan and Olotayan, also islands with beautiful beaches. They seemed like honest, hardworking people who took time off to talk to me and my travel companions.

For your people, life seemed slow and laidback. 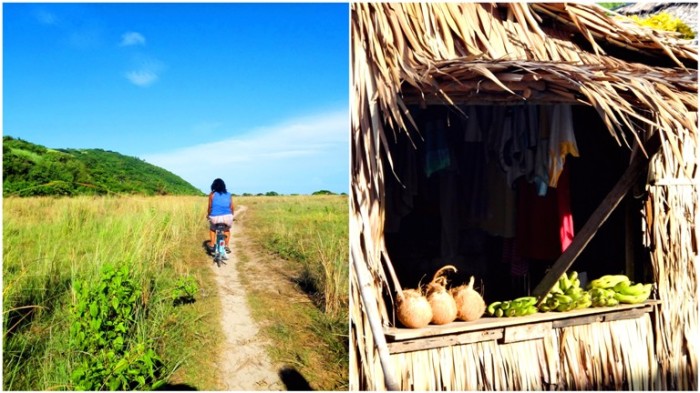 At night, though, you broke my heart.

Instead of the quiet unspoiled beaches usually offer, loud music kept blaring at your shore. And when my travel companions and I went to the middle of the beach to see, we found, to our shock, a beach party in full swing much like in Boracay – a mobile bar offering an array of booze, blinking colored lights, and fire dancers. At another spot there was an audience listening in rapt attention as they were taught the finer points of mixing cocktails. And, when we looked up at the sky, we saw paper lanterns flying dangerously close to the forested cliff.

And, we had a difficult time sleeping as fireworks kept flying and falling in the sky. One felt like it even fell close to our tent.

Calaguas, you are no longer the unspoiled paradise I read about and fell in love with.

Thankfully, the kagawad in your Barangay Mangcawayan graciously listened to my concerns and answered my questions even in the middle of his Sunday morning errands. However, my apprehensions only grew.

They also have yet no ordinance regarding noise and the use of fireworks, though Kagawad Raul assured me that they will work on it when I told him about the fireworks exploding near the shore.

Unfortunately, Kagawad Raul said they do not get income from the visiting mobile bars, fire dancers, or any of the people coming in to organize similar activities. They just get the Php 20 share from the island fee. In fact, they are not always informed if there are such activities. People organizing activities in the island are not required to get a permit from the barangay.

When I asked him straight if the barangay plans to develop Mahabang Buhangin like Boracay, though, he said they do not see hotels and commercial establishments in Calaguas’ future. Cottages and simple accommodations would be enough.

Photo on the right by Jherson Jaya

I am not assured, though, as the barangay seems to have not much control over what people and private businesses do in Calaguas, judging from my conversation with Kagawad Raul.

Calaguas, I know I may not be able to stop you from going the way of Boracay, but my fervent wish is that should that happen, the money you bring in would most benefit your kind and gentle people, not just profit-oriented businesses.

Calaguas, I still love you, but I do not plan to have a reunion with you anytime soon. Maybe if I do I will go on a weekday as I heard the beach parties there are just usually on weekends. Or maybe I will go to your other islands, not at Mahabang Buhangin. I heard that the few islands the people I know visited are not as powder-fine, though.

Yes, you are still beautiful, but you are no longer the beach of my dreams.

NOTE: What I learned about Mahabang Buhangin issues (island fees, agreement – or lack thereof – of activities in the island) is based only on a conversation with Kagawad Raul and a few other locals. I invite travelers to dig deeper into the story.

32 thoughts on “Dear Calaguas: Do You Really Want To Be Like Boracay?”