My grandmother, just arrived from Quezon, opens a multi-colored bayong and I wait in anticipation. From the  woven bag peeks out tiny, shiny shells with even tinier feet wiggling. Often food, sometimes pets, kimpi (crablets, or more known in Tagalog as talangka) are an indelible part of my childhood. My lola and kimpis are inseparable in my memory, as she used to bring hundreds of them almost every time she visits.

I cannot say I lived in Calauag, Quezon, having visited there around ten times only, maybe less. But Calauag undoubtedly lives in me, with my lola‘s regular visits, bringing with her objects, scents, tastes, and stories from the province. Even now, all the tikoy I tasted could not compare to the tikoy my lola brings me and my family. I found out just recently that it is in fact from the neighboring municipality Lopez, but I will always remember it as “the tikoy Lola brings as pasalubong.”

Still the best ever tikoy I’ve ever tasted. I encourage you to try it!

My grandfather is part of my memory imprint, too, remembered and un-remembered, as he took care of me as a toddler in my father’s absence, and lived with us for a considerable time after my dad went home from his work in Saudi Arabia.

And while my visits to Calauag are few and far in between, my most vivid memory is that of riding the skates (more pronounced as “skeets”) with my lolo. It is a skates-inspired open-air vehicle running on railroad tracks and used as public transport in municipalities along the railroad. My lolo and I rode through streams and rice fields under a bright sky, and we stopped at one stream so blooming with hyacinths that the water showed only in gaps. A little girl was gathering some, and my lolo asked the girl if he could give me some as well. I recall that moment now with Technicolor sharpness. It remains to be one of my happiest travel memories. 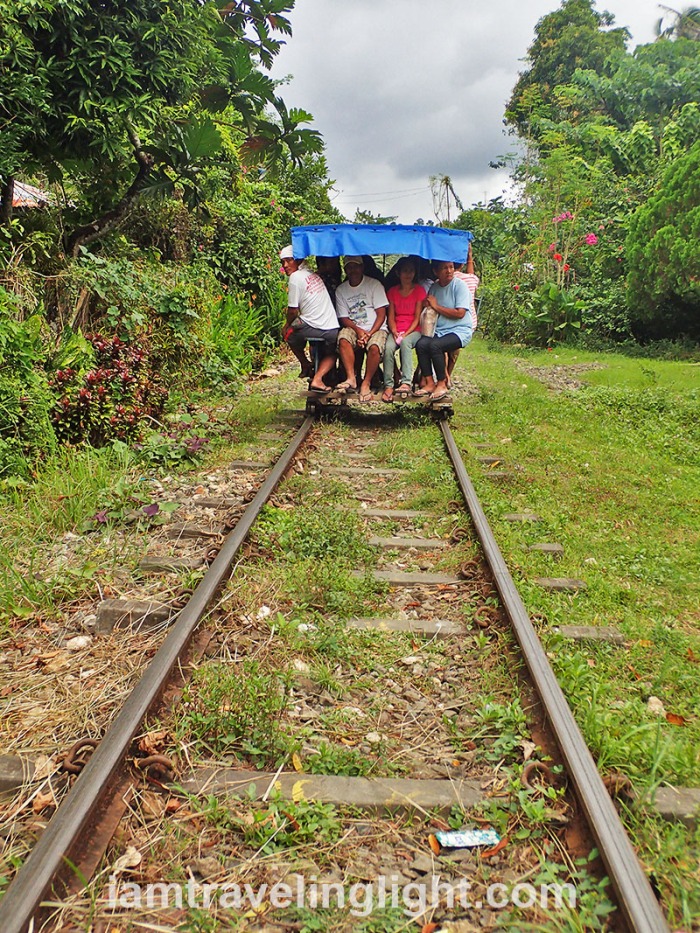 Skates! One of my fondest childhood memories.

My Ilocano blood arguably runs thicker, as my father’s parents and my mother’s father hail from Ilocos Sur. But Calauag feels more like home, probably because my lolo and lola so often brought it to me in my childhood.

And even now, I unconsciously use words I first heard from my mother and my grandparents. I realized this when friends teased me about my verbs. “Nakain ako ng isda” means “I eat fish” in Quezon, but in Metro Manila Tagalog it can mean “I was eaten by a fish.”

Over the years, though, Calauag just became more part of my memories than my present. My grandparents’ visits lessened, and I became busy, living away from home in college, and later preoccupied with work after graduation.

My lolo eventually passed on, and though I mourned him, I did not feel compelled to re-visit and immerse myself in Calauag. I later recognized it as my coping mechanism. I still saw my lola during family reunions, and those moments were enough for me then.

But then, as I observed my lola age, and her memories starting to fade, I thought of seeing her and hearing more of her stories. This realization especially struck me as I recovered for several months, mostly at home,  after an accident. There were still stories I wanted to hear, and memories I wanted to make.

My lola at her home in Calauag

And so, during our latest family reunion, I sat down with her and let her share her stories. And from there I learned how she put herself through school and eventually became a teacher despite lack of money, and how she fiercely insisted and worked for my mother and her siblings to have an education. Education back then, she said, was considered a luxury, and so my lolo was not so attached to their children getting one beyond free and basic education. But my lola, being a teacher, knew its value. Back when there was still a Quezon-Manila-Ilocos train route, my lola bought beautiful mats from Ilocos and sold them in Calauag as one of her ways to fund her children’s education.

Looking around at the family reunion of my parents, aunts, uncles, cousins, nephews, and nieces, I had a new appreciation for my lola‘s legacy. And so I vowed to visit Calauag soon and hear more of her stories.

On her 87th birthday a few months after my parents and I went to visit. It was also my first trip after recovering from the accident, which made it all the more poignant for me. I learned more about my lola through stories not only told by her but also by my mother, aunts, and her only surviving sister. It was also refreshing to hear my mother and her siblings share stories of their childhood.

My mother and aunt sharing a laugh as they recalled childhood memories.

Among the stories they told is my lolo and lola’s love story. Lolo was then a soldier assigned to Calauag, and from their barracks up on a hill he often watched the school, or learning center, where my lola taught back then. Obviously, my lolo was smitten, my aunts said, as he watched her walk to and from the school. 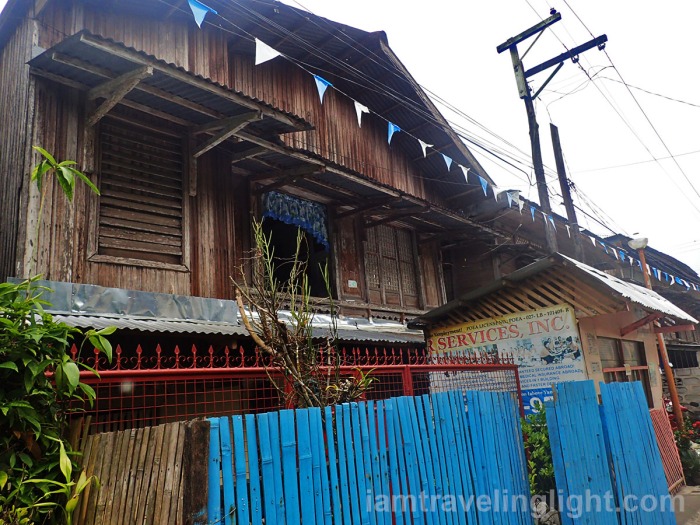 …and around this area was where my grandmother once taught.

As I laughed with my relatives and probed further on their stories, the husband of one of my aunts remarked, “Akala mo siguro dati ang pangit ng roots mo kaya wala kang interes.” (You probably thought your roots were ugly so you had no interest) The words stung. While they were not exactly true, they were not entirely false either. I had all the intention of visiting Calauag once I had the time, but I took for granted that it was just there any time I wanted to visit. And, when wanderlust called and I started traveling and blogging, I was drawn to far-off places and their stories, not realizing the wealth of stories from my own roots.  But then I also believe that it is my very experiences in those far-off places and the stories I heard there that also make me better see now the beauty and gift of my heritage.

My visit did not end with the stories, though. My parents, aunts, uncles, and I all went off on an adventure. First, we went to the harbor, which is another part of my childhood memories. Now, it has a huge “C” with a turtle figure beneath, as “Calauag” is said to refer to the movement of the swimming turtle’s feet.

The harbor with the “C” 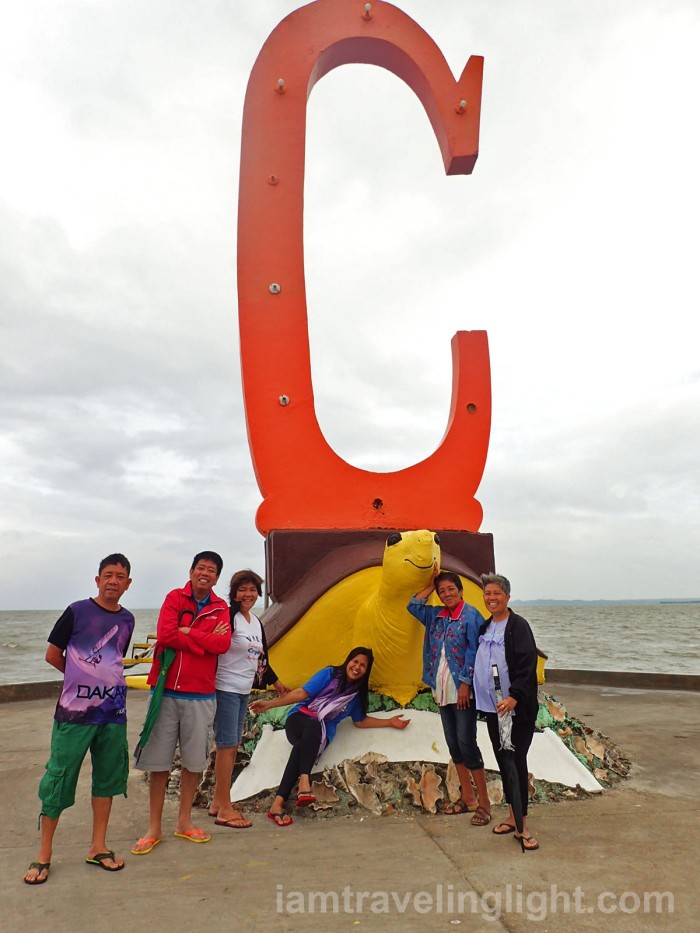 And then, we did my much-anticipated activity – ride the skates!

Locals gamely smiling as I raised my camera

Riding skates still feels magical for me after all these years.

We stopped at a barangay where my aunt also had an errand, and walked the narrow cement road and bridge. It was a place I had never been to before.

The path is quite narrow, but people skillfully bike through it and even transport goods through it!

Crossing a bridge over mangroves

We passed by mangroves, coconut trees, and occasional houses before arriving at a vast rice field. From here, we were able to locate the house my aunt would be visiting. We had walked for over thirty minutes before, but it did not feel long as there was so much to see. This was a Calauag new to me.

My dad walking along rice fields

Our final stop during our walk

On our way back, as a sweet ending to our walk, we met a couple making native fans (pamaypay) by hand, and they proceeded to make some for us. The shape and color of the fans reminded me of hearts, and we got some to give to the ones close to our hearts. My dad joked that he already had a Valentine gift for my mom. 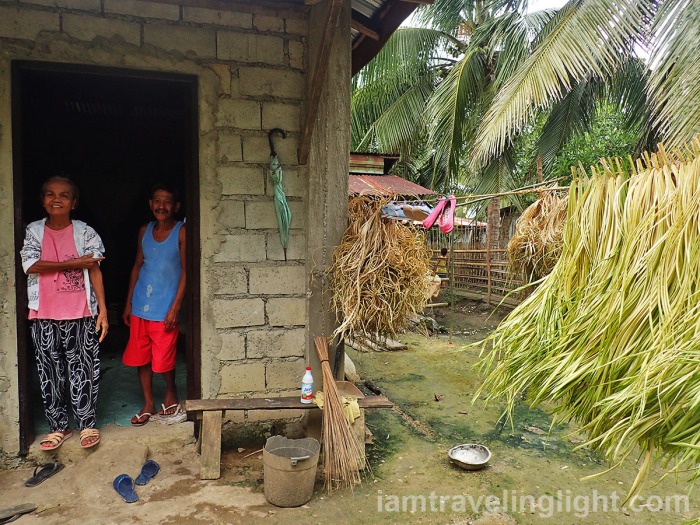 The happy couple who made our fans!

With our fans, we rode again on the skates, and then bade a goodbye to my lola, aunts, and uncles before setting off on the long journey back to Manila.

My trip was not only about returning to my roots and hearing my lola‘s and relatives’ stories; it was also a new adventure as I re-experienced places and visited unfamiliar ones, making new memories.

While I would not exactly promote Calauag as a must-visit place or a bucket list destination for others, it remains one of the top items on my list which I will visit again and again. It is, after all, where my grandparents live, and where I had some of my happiest travel memories.

This is my entry to the Pinoy Travel Bloggers’ Blog Carnival for November 2016 with the theme “Stories from my Hometown” hosted by Celine Reyes of Celineisms.

10 thoughts on “An Adventure Worth Taking: Going Back to My Roots”